“In particle physics, you get a sense that there’s something going on, some trick you’re missing, something that’s not in existing theory,” says Sundrum, 45, a forthright man with a strong face framed by oversized ears. “Like many physicists, I’m working on the idea that Einstein was right—he just wasn’t complete. To get there, we have these tricks we develop to fill the gaps in his theories. And in some sense, the Randall-Sundrum models are yet one more trick.”

Dreamed up a dozen years ago during a meeting of minds at an ice cream shop on the Massachusetts Institute of Technology campus, Randall-Sundrum’s “trick” was to marry some of the concepts of supersymmetry and general relativity with a notion borrowed from string theorists, who believe the universe may have as many as 11 dimensions (seven more than the observable ones: the three of space—depth, length, and width—and one of time). Sundrum’s major contribution to the models is paring those extra dimensions, which string theorists believe are almost impossibly small, unobservable, and folded around one another, down to one that is tiny yet infinite—a concept that turned the tightly knit world of physicists on its ear, and caused observers to dub Randall and Sundrum’s thinking bold and counterintuitive. 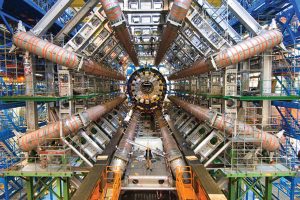 Randall-Sundrum models are partly inspired by the matching, countervailing particles envisioned in supersymmetry, but they don’t need that theory to support them. In fact, the models rank as a ballsy alternative to supersymmetry, which among physicists might be the most popular schema out there. The series of papers Sundrum and Randall have published since their Cambridge confabs have regularly been among the most cited in physics. They answer, at least theoretically, why gravity acts so weakly upon us, while other forces—like electricity, which can be created very easily with a comb and some hair—have a much more immediate presence.

In the first major paper the duo put together—called Randall-Sundrum model one, or RS-1—they outlined their initial concept: a finite fifth dimension, warped by the effects of gravity and unseen by humans, and equipped with multidimensional “branes” (short for membranes) on either end. To picture it requires some imagination. Although it wouldn’t be entirely accurate to do so, envision the extra dimension as long and horizontal. Place the branes vertically (or perpendicular) at its far ends. Elementary particles—electrons, quarks, and the like—are centered on a brane at one end of the model, while gravity is everywhere, including the extra dimension, and is as strong as the other forces. RS-1 showed that gravity in the extra dimension pulls on the gravity of the other dimensions in space, drawing it into the vicinity of the brane opposite from where elementary particles reside. Matter is separated in the extra dimension away from the component of gravity that pulls on the other dimensions. If this separation were perfect, we would see no effects of gravity in ordinary life. But the duo’s calculations showed a tiny leakage across the extra dimension, which allows us to experience a weakened version of gravity.

Later, in a second model (RS-2), the pair envisioned a universe in which standard matter and gravity could be localized on a single brane, which is placed amid an infinitely large extra dimension. In short, Sundrum and Randall posit that extra-dimensional gravity is strong enough to steal away some of the mass of particles. If proven true, RS could be the black hole that swallows up a big chunk of the standard model problem by demonstrating how gravity is weak and why particles lack a surprising amount of mass.

RS involves one other key ingredient: a particle called the Higgs boson that mediates the force of gravity. That’s the bit of matter, theorized to have existed moments after the Big Bang, that physicists are trying to create at the Large Hadron Collider, or LHC, the subterranean, several-billion-dollar mega-machine that straddles the border of France and Switzerland. The Higgs boson is so central to the work of Sundrum and those who espouse competing theories, and has filled such a huge niche in the theoretical framework, that it is called “the God particle.” Its “godliness” also comes from its role as the so-called mother of mass—it gives mass to all the other particles.

Not many of Sundrum’s colleagues buy what he calls “the RS solution.” There’s little concord among the explain-the-universe-in-one-theory- or-less crowd, a band of outliers that (including physicists who design experiments) might not exceed 10,000 people worldwide. “I think the Randall-Sundrum models are well-based and thought-through speculation, motivated by key issues in particle physics and carried through well,” says Lee Smolin, a researcher at the Perimeter Institute for Theoretical Physics, in Toronto, and a well-regarded theorist who champions variations of loop quantum gravity theory. “I would, however, bet against them being right.”

But if testing at the LHC yields a Higgs boson that gives clues to an extra dimension in nature, Sundrum can cash in, scientifically speaking. After years of flailing in the dark, experimentalists have figured out some ways for attaining the holy grail of science—quantification. They believe they’ve concocted methods for measuring how particles react when smashed together at speeds similar to those during the Big Bang—a necessary element to see how they were formed billions of years ago, as the universe was being made. If they’re successful, they’ll produce a Higgs boson out of whole, cosmic cloth for a billionth of a second or so. “We can finally measure this stuff, smash things together, and see what comes out of it,” says Sundrum. “We’ll see if anybody’s right.”

Or not. You could call it the Sundrum Conundrum. He and Randall have built a workable mathematical model that could explain The Nature of Everything. But it could all be hopelessly wrong. “We’re all dealing in long shots here,” Sundrum says. “I’m 1 percent sure I’m right, which is better than thinking I’m .0001 percent right. I prefer my long shot to the others’ long shots. I’m certainly not going to say I’m 100 percent sure of anything.”