WHEN LACKS CAME TO Johns Hopkins complaining that she had “a knot” on her womb, she entered the “colored ward” in the only major hospital in Baltimore that would treat an African American. She received treatment that did not succeed but was state of the art in 1951. 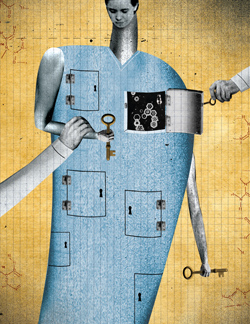 Simultaneous with her care, researchers at Hopkins and elsewhere were searching for better ways to diagnose cervical cancer, which was killing 15,000 women per year. They wanted a method of growing cervical cancer cells in the lab. That dovetailed with George Gey’s quest to create an immortal cell line. He received tissue samples from every cervical cancer patient who came through Hopkins’ door, including Lacks. Skloot states in her book that no one asked Lacks for permission to take some of her tissue for Gey’s research. Documentary evidence of what was said at her bedside is scant and can be taken either as supporting Skloot’s assertion or arguing against any retrospective moral judgment. Joann Rodgers, senior adviser for science, crisis, and executive communications at the School of Medicine, says, “People I’ve talked to here have told me that physicians and scientists did talk to their patients if they wanted to take tissue, if they wanted to have them participate in research.” But Skloot has seen the consent form for Lacks’ treatment, and it does not include any mention of taking tissue for research. Howard Jones, who was Lacks’ gynecologist at the hospital, told Skloot that he never sought consent for tissue samples. Present-day researchers at Hopkins acknowledge that in the 1950s, the very concept of informed consent as it’s now known was not on researchers’ minds. Daniel Ford, vice dean for clinical investigation at the School of Medicine, observes, “In that era, researchers got a little carried away with science and sometimes forgot the patient, and physicians treated patients the same way clinically—it wasn’t shared decision making.” David Nichols, vice dean for education at the school, adds, “It was a relationship that was utterly imbalanced with respect to power and privilege. There’s a lingering sense, even today, of this imbalance, which has deep historical roots.”

Three things make consent a more complicated matter than simply reading a clause like that and initialing the form. First, in some cases a patient may be asked to provide a biospecimen—tissue, a DNA swab, a blood sample—for a specific research project that has been approved by an institutional review board (IRB) and that requires specific consent. More often, though, researchers accumulate biospecimens for future use in research that cannot be specified at the time of collection. In 1951, someone could have told Henrietta Lacks or her husband that they wanted cells from Henrietta’s cervix to research a better means of diagnosing her cancer. They could not have told her that someday science would want her cells for research on the effects of zero gravity in outer space, or for the study of leukemia or lactose intolerance or longevity or the mating of mosquitoes, all of which has happened. Chi Van Dang, the School of Medicine’s vice dean for research, points out that scientists can’t possibly anticipate many types of future research. He says, “Do we have the trust of the public to say, ‘Look, we have your cells. What we’ll do with these cells, I can tell you to some extent now, but five or 10 years from now they could be used in a completely different way. With your permission, we need to have that flexibility.’” Scientists worry that stringent regulations requiring specific consent for any future uses of biospecimens could hamstring research.

But a recent court case demonstrates that Dang’s hoped-for flexibility on the part of the public cannot be assumed. Arizona State University recently settled, for $700,000, a lawsuit brought by Havasupai Indians after they learned that blood samples donated for a study on diabetes among tribe members were also used for research on schizophrenia and inbreeding. The Havasupai hold sacred ancestral stories about their origins in the valley they still inhabit, and they were particularly offended to learn that their samples were used in research about the migration of ancient peoples from Asia. They had not been asked if their blood could be used for those additional purposes, and they sued. Joan Scott, director of Hopkins’ Genetics and Public Policy Center in Washington, D.C., and a research scientist at the Berman Institute of Bioethics, says, “People see bits and parts of themselves as bits and parts of themselves, you know? We find that in the research we’ve done there really is a strong altruistic vein in the American public, in particular individuals who have diseases. That’s their way of helping someone not go through the same things they did. [But] what they do expect is transparency and full disclosure about what’s going to be done with the sample.” Skloot has interviewed plaintiffs in lawsuits over tissue research: “Over and over again they say, ‘If they had just asked us, we’d have said yes.’”