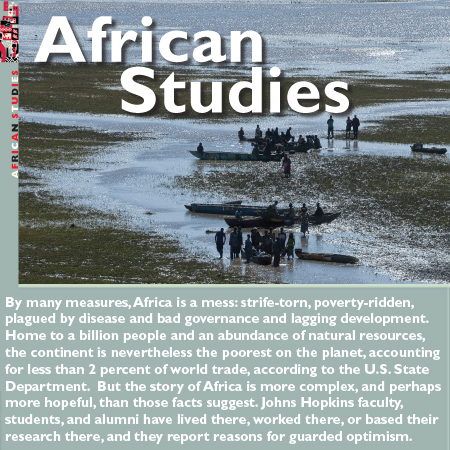 1.  How firmly has democracy taken root in Africa? The United Nations reports that Africa currently has the greatest number of countries with democratic governments since the 1960s, though it’s far from accurate to call the continent a bastion of free and fair elections. “Democracy has a foothold; it’s more than just a toehold,” says […]

END_OF_DOCUMENT_TOKEN_TO_BE_REPLACED

More than 25 years have elapsed, but Peter M. Lewis vividly remembers an early morning telephone call and subsequent walk through a city market. He was a doctoral candidate at Princeton University in the 1980s when he applied to the U.S. State Department for a summer internship. “In those days they had a good program […]

END_OF_DOCUMENT_TOKEN_TO_BE_REPLACED

They travel in search of answers, and adventure often finds them. Hundreds of Johns Hopkins academics, clinical workers, employees, and researchers work in Africa, seeking knowledge about cultures, disease, and the past. They do so at some peril. Before they board a plane, they are vaccinated against yellow fever, hepatitis A, rabies, typhoid, and meningitis. […]