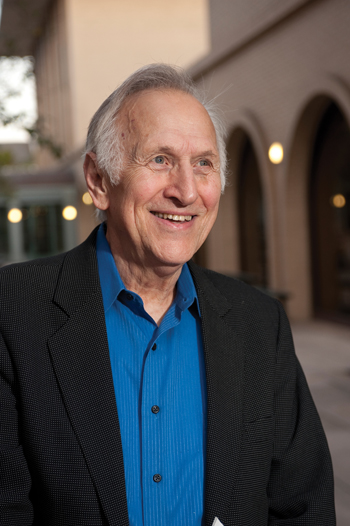 Gustav Meier: “As a conductor, you are an ambassador to the music.” Photo: Will Kirk

Gustav Meier sits on a bench on the campus of the Peabody Institute flipping through his new book, The Score, the Orchestra, and the Conductor. The director of the graduate conducting program at Peabody grabbed this particular copy from a student shepherding stacks of the book to a signing due to start at any moment. Meier still can’t quite believe the text is complete and in his hand. He has spent decades training aspiring conductors in the subtle art of the baton, and it took years to put those teachings into print. “This book is 50 years in the making,” he says.

At 80, Meier is a man who has led symphonies around the world and inspired a generation of musicians through his teaching. Before coming to Peabody in 1997, he taught at the Yale School of Music, the Eastman School of Music, and the University of Michigan at Ann Arbor. He also directed the Conductors Seminar at Tanglewood for 16 years. His students, like Marin Alsop of the Baltimore Symphony Orchestra, have gone on to lead the world’s greatest orchestras. Yet Meier is nothing like the stereotype of the egomaniacal maestro. Clad in dark jeans and a stylish Oxford shirt, he commands presence without demanding attention. Meier is affable yet measured, verbose but not bombastic. He is a passionate teacher and leader with a deep reverence for music and a respect for the musicians who perform it. The title of his book says it all: the conductor is listed last, in service to the other elements.

“He is so very Swiss,” says Marin Alsop, referring to Meier’s childhood in Switzerland. Alsop considers Meier a mentor, and over the years the two have gone from a teacher-student relationship to professional collaborators, including a program that brings talented Peabody students to the BSO. “I would say his style is understated. He is very attentive, but he’s not a lunatic jumping in your face. He’s not prone to huge outbursts.”

A considered demeanor is very much a part of the Meier pedagogy. It is paramount, he says, to earning the trust of both the musicians and the audience. “As a conductor, you are an ambassador to the music. You have to learn the right mannerisms, show humility, talk to the audience,” he says.

Meier goes into great detail in his book about how to approach a score, breaking down the elements of the composition through a unique marking system that he illustrates through examples. The 512-page volume has 200 line illustrations and 500 music examples as well as a cross-indexed glossary of orchestral instruments in four languages. He addresses everything from tempo to choosing the right soprano.

Meier may counsel on methodology, but his students say that he does not foist a set of dictates. “He fosters individuality,” says Bobby McFerrin, the Grammy-winning musician known for his 1980s hit “Don’t Worry Be Happy.” McFerrin first met Gusty, as he calls him, in 1989 at a party honoring Leonard Bernstein’s 70th birthday. McFerrin was preparing to conduct his first concert and signed up for seminars with Meier at Tanglewood. He remembers watching Meier stand in front of an orchestra. “It was amazing what he could do with a simple flick of the wrist. Every move was full of meaning, nothing was superfluous.”

Over the years, McFerrin would fly to Ann Arbor for private lessons at Meier’s home. He says Meier’s greatest gifts as a teacher are his insight and generosity. “He understands the fact that a conductor’s language is so personal, and he allows his students to do things and to experiment as long as it works. That takes incredible insight into the personality of each individual,” McFerrin says.

Meier still lives in Ann Arbor with his wife, Emy, and he commutes to Peabody every week. He admits the flying takes more of a toll than it used to. Inside Peabody’s Arthur Friedheim Library, students and faculty have gathered to celebrate the book’s release and to get the great maestro to sign their copies. The group surprises Meier with a cake in honor of his 80th birthday, which was this past August, and he looks slightly abashed at the attention. He cuts into the buttercream and doles out slices to the crowd. “What about you, Gustav?” someone asks. “No, no, you first, you first,” he says, as he passes the plates.