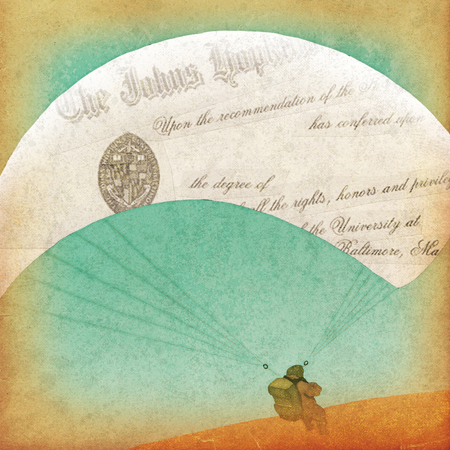 On a path that has taken him from Baltimore to the Bronx to London to Afghanistan to Washington,  D.C. (and, now, Wall Street), Wes Moore has learned how to see—and seize—the opportunities before him. A Baltimorean who moved to New York City as a young child, he was a restless teen who bristled against authority. A change of scenery and vision (read: military school) was what it took to start him moving forward. “[Military school] was the first place I actually dared to think bigger,” he says today. After graduating with an associate degree and a commission as a second lieutenant in the U.S. Army Reserve, Moore returned to Baltimore to complete his undergraduate work at Johns Hopkins, with student aid scholarships, and turned his vision upward. “Hopkins was where that vision got a dose of clarity. I knew if I could compete there, I could compete anywhere. I knew I could make a contribution.”

Moore became a student intern for Baltimore’s then mayor, Kurt Schmoke, who saw the young man’s potential and encouraged him to apply to be a Rhodes Scholar. In 2001, Moore got that Rhodes Scholarship and, while at Oxford University, studied radical Islamists and non-conventional warfare. That work got him hired by U.S. Homeland Security officials, and after a brief stint in Washington, Moore realized that to understand how global politics worked, he needed to understand the global economic system. He returned to London to get that financial education as a banker, but his training was cut short in 2005 when he left the world of finance to serve on active duty in Afghanistan as a member of the 82nd Airborne division. During his deployment, he spearheaded a successful program to rehabilitate Taliban, al-Qaida, and HIG fighters and earned a field promotion to captain. A White House Fellowship followed (he was the youngest member of the class), and in 2007, he returned to a career in finance by joining Citigroup’s Investment Bank. He’s also awaiting publication of his first book, a nonfiction work that juxtaposes the parallel lives of two Baltimore men named Wes Moore; the other Wes Moore (discovered by Moore in a newspaper article) was sentenced to life in prison for murder.

Moore has a talent for turning potentially hazardous situations into opportunity. “It sounds trite, but the answer to that old problem of ‘How do you eat an elephant?’ It’s one bite at a time.”