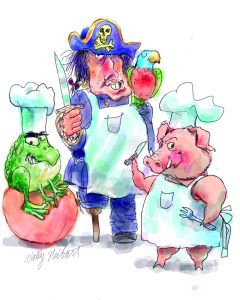 Would you eat at a place called The Frog and Peach? Probably not. That was the point of a classic bit of British comedy, viewable once again on the Internet. In it, a gruff and daft Peter Cook attempts to convince a skeptical Dudley Moore that the world needs such a restaurant, a place where a young couple hungry for frog and peach could go for an inexpensive romantic dinner. By his own admission, none did. The combination of frogs and peaches is just not to everyone’s taste, but neither is British comedy. Even so, maybe Cook had a point: There is at least one U.S. restaurant by that name. It’s in New Jersey.

That sketch came to mind recently in an odd way, via an email exchange about Robert Louis Stevenson’s Treasure Island and the character Long John Silver. It was a reminder that I’ve never figured out why a seafood restaurant chain came to be named after him. Like The Frog and Peach, the phrase “Long John Silver” does not evoke romantic dining, let alone anything family friendly. Fried chicken from a Kentucky Colonel I could understand—he had people fry it for him. But fish-and-chips from a frightening, treacherous pirate with one leg and a parrot perched on his shoulder? I don’t think so. You don’t want a parrot or a pirate in the kitchen.

Clint Eastwood’s Hog’s Breath Inn still flourishes in Carmel, California, but the name doesn’t stimulate the palate in positive ways. Not much about a pig smells good until it’s on the table. I also don’t understand the appeal of imagining Dirty Harry or a psychopathic cowboy with no name in the kitchen. There are, however, Dirty Harry items on the restaurant’s menu, but it is hard to imagine the character we know and love from the movies savoring a namesake dinner of chopped sirloin with wild mushrooms, horseradish, and whole-grained mustard sauce, and garlic smashed potatoes. Unless he killed the critter and smashed the potatoes himself.

Long John Silver and Dirty Harry aren’t the only scary front people for restaurants. As a child I was disconcerted by the Bob’s Big Boy chain’s pudgy, goofy-looking logo. That’s what I was trying not to be.

Then there is the scariest character of them all: the hamburger chain Wendy’s cute little girl, with her red hair in pigtails. At that age she might eat a burger. Give her a couple of years and she’ll be an adolescent, eye-rolling, tofu-nibbling, soy milk–sipping vegan. When forced to dine with carnivores, her mealtime conversation will link meat and murder, and cows with methane gas and global warming. By the time dessert arrives, the last thing the carnivores will long for is a nice, juicy hamburger.

At the other end of the scale, among the most distinguished American restaurants is The French Laundry in California’s Napa Valley. Do you really want to spend a lot of money to eat among dirty clothes? If so, consider the spin-off possibilities: The Chinese Laundry (Asian cuisine), The Hand Laundry (local, natural, and healthy cuisine), and The Money Laundry (Mafia cuisine, and back to New Jersey). The notion of a My Laundry restaurant is too gross to consider.

You don’t have to look to national chains or California enclaves of preciousness to find restaurant names and namesakes whose stomach appeal is dubious. Run your own test and check out your local telephone directory. Here is an annotated sample from Baltimore’s: Soups on Baltimore (punctuation might make that one more appealing). The Ugly Muffin, Bare Bones Restaurant, and Grind on Café keep expectations low. What about the Yeti Restaurant and Carry Out? The Abominable Snow Man in the kitchen is not much better than having Long John Silver and Dirty Harry there. It may be a canny assessment of the market that led a cardiovascular medical practice to place three ads on Baltimore’s restaurant yellow pages.