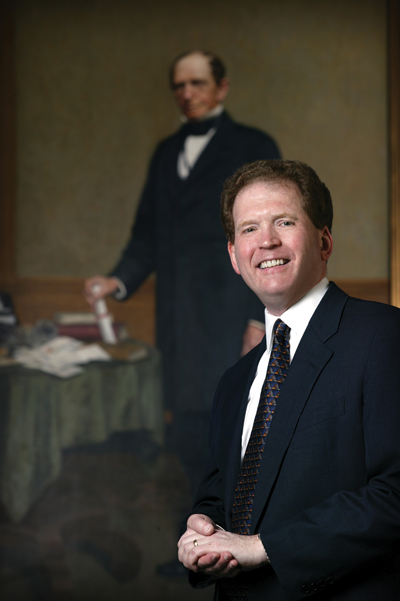 In his first days on the job in September, Minor walked the campus, canvassing faculty and students about their experiences. “I wanted to know what was working for them and what wasn’t,” he says. His move to Homewood was a short one, just a few miles across town from the School of Medicine, where he served as director of the Department of Otolaryngology–Head and Neck Surgery for six years. During his 16 years at the School of Medicine he built a unique program around balance disorders, developed a successful clinical practice, and attracted and retained talented faculty while garnering resources to help them thrive. As provost, that formula is something he hopes to cultivate throughout the university. “Recruitment, retention, and resources are the most important things we do here,” Minor says. “Getting the right people and helping those people succeed is a big part of the job.”

Minor sees himself as a collaborator, a team builder who believes in pollinating ideas across disciplines. He hopes to foster new connections among the schools and build areas of research and academic study, he says, and adds that he looks forward to meeting with deans to identify those areas where the university might grow. “We want to build more programs where we are preeminent around the country and around the world,” he says. But that doesn’t mean hemming in the various schools with overarching agendas. “At a university as large and diverse as ours, there doesn’t need to be one set of goals. What we have is something much more important than a single set of goals—we have a shared set of values.”

Collaboration, collegiality, and excellence being top among those values, in his view. By way of example, Minor points to the success of Hopkins faculty in earning sought-after grant dollars from the American Recovery and Reinvestment Act. As of early October, the university had been awarded 304 grants worth $149 million from ARRA. “One thing the Hopkins faculty does so well is respond to a challenge. The whole system is geared up when there is opportunity,” he says.

Sitting at the conference table of his office, Minor remembers when he and his wife, Lisa Keamy, a primary care physician, first came to visit Hopkins. Today, they have a son, Samuel, 15, and a daughter, Emily, 18, who started Harvard this fall. (“I ask her about programs there,” he says, joking that he pumps her for information for his new job.) “When I came here in 1992 to talk about a position,” Minor remembers, “it felt different from the other excellent places I was looking for a job. That feeling has never left. Making sure that that atmosphere continues is an important part of central leadership.”