Six Hopkins scholars speculate on the promise and the shocks of the future.

Video footage of our round table conversation is included throughout the article below. To jump straight to the video, please visit our YouTube channel here.

Think back, if your memory banks extend that far, to the heady days of the 1960s. Amid civil disturbances and a generational revolt against a war, Americans—no matter their differences—faithfully shared one civic religion: progress. The 1964 World’s Fair in New York highlighted the “miracles”—jet packs, flying cars—that would come to those who survived long enough. A TV-cartoon family from the future piloted rocketish bubbles through the skies. Government officials spoke of winning the war on cancer. Neil Armstrong walked on the moon. There seemed to be no constraints on the wonders technology and medical science would bring.

Push the fast forward button on the DVR to the present. Amid the blur of dystopian, even apocalyptic images, one thought becomes clear: The future ain’t what it used to be. Millennial movies like The Children of Men and 2012 foresee the worst: environmental catastrophe, the wholesale jailing of immigrants, the end of the world. Books that richly imagine a post-human future, such as The World Without Us, or a post-apocalyptic one, like Cormac McCarthy’s The Road and the Christian fundamentalist Left Behind novels, are best sellers.

Global warming. Pandemics. Peak oil. Heightened tensions between groups of people. It’s clear our era is not only a harbinger of change but a time when we realize we soon must make some transformations—or face some deathly consequences. 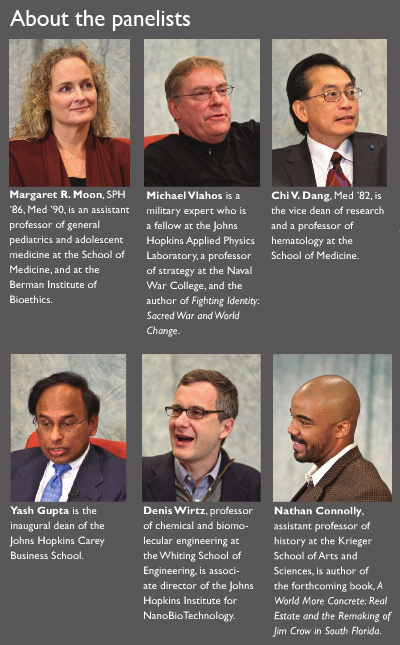 With all that in mind, Johns Hopkins Magazine gathered a handful of professors and thinkers to peer into the dark to glean what might be ahead in the next 50 years or so. In October, six of them—the head of the business school; a medical dean who is also a leader in cancer research; a military strategist; a biomedical engineer on the forefront of discoveries in nanotechnology; a pediatrician who also teaches bioethics; and a 31-year-old historian—got together for a 90-minute discussion on the Homewood campus to confront the questions of our coming times: Are our visions of the future being swallowed up by the dark of the present? Or will the optimism of yore return, as we find answers to many of our global dilemmas?

Aided by an open-minded, collegial spirit of inquiry, here’s what they had to say: