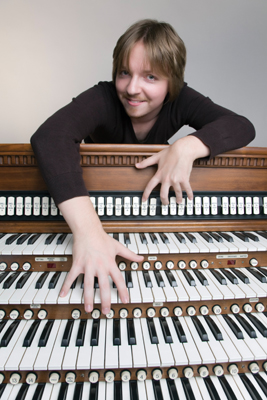 Four days, 10 full-length recitals, more than 19 hours of playing. Only a handful of musicians have done it, and Felix Hell was one of the youngest. In 2006, at age 21, the German-born organist executed a marvel of musicianship at the Peabody Institute when he performed the complete works for organ of Johann Sebastian Bach. For Hell, it was just another in a long line of early and significant successes.

At the tender age of 8, Hell memorized a Bach prelude in three days without ever having played piano. Several months later, his father took him to an organ concert and Hell was rapt. Before he turned 9, he was playing organ at a liturgical service. At 18, Hell became the youngest organ major to graduate from Philadelphia’s Curtis Institute of Music, an impressive feat at a school that seems to specialize in child prodigies. He then came south to study at Peabody Institute under Donald Sutherland, earning an artist diploma in 2007 and a master of music degree just one year later. All the while, he produced eight CDs and played more than 650 concerts around the world, helping to earn him one of the first Johns Hopkins Alumni Association Outstanding Recent Graduate Awards.

“Felix has the ability to be one of the leading organists of his generation,” says Sutherland. He remembers helping the wunderkind learn the full range of Bach’s repertoire for that marathon concert: “It’s an athletic event in a sense, and you prepare and pace yourself in the same way. He is an exceptional talent.”

This fall, Hell returned to Peabody to work on a doctorate. “At this point, I’ve gotten more out of my life than I ever expected. I’m going to keep doing my best, be grateful, and let the rest fall into place,” he says.

He hopes to teach at a major conservatory one day. Then, he jokes, his students can say they got their degree “from Hell.”