Toying with Legos to solve a nanoengineering problem
December 2, 2009 |  by Michael Anft 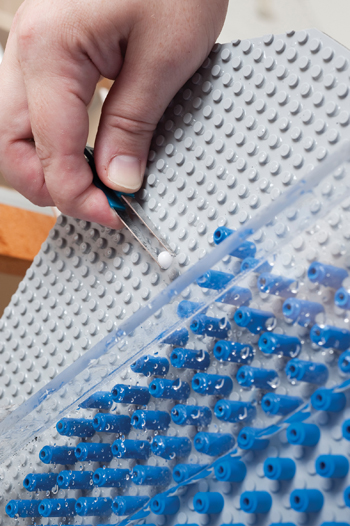 Legos for science: Engineers devised this Lego pegboard to test how nanoparticles travel through liquid. Photo: Will Kirk

You could mistake it all for the jerry-built geeky kid stuff of a high school science fair: a small fish tank, some bricks, balls, viscous goo, and several pieces of Lego-brand building blocks. And yet, the simple-if-tortured setup has yielded Johns Hopkins engineers some clues as to how nano-sized particles travel through liquids. The findings could lead to cheaper and more effective medical tests, and technology that more accurately measures toxic substances in water.

The Legoland that Joelle Frechette and German Drazer, assistant professors of chemical and biomolecular engineering at the Whiting School of Engineering, pieced together in the basement lab of Maryland Hall helped them investigate how wee bits of matter travel through fluids and around obstacles—a key fac- tor in determining how elements of blood or particles of DNA could best be sorted for testing. Their observations, published this summer in both The Journal of Fluid Mechanics and Physical Review Letters, could be especially useful to developers of an emerging technology called “lab on a chip,” a millimeters-long glass device that can separate and measure aspects of certain molecules. Companies see the lab on a chip as a boon to researchers who need to quickly separate cells to study them individually, or to companies that want to sift materials to detect the presence of particular things in the environment.

Scientists developing the lab on a chip have sought to shrink down the functions of a full-sized medical lab to a microchip so they can process molecules faster, more efficiently, and more safely. But sorting those molecules has presented bioengineers with several problems. In labs on a chip, molecules or particles fall through a lattice of obstacles designed to funnel them into specific landing spots based on their size. The sorted materials are then ready for testing. But understanding how this process works has proven tricky because the particles are so tiny that the dynamic forces that part them are difficult to study. And for the chip to reach its potential, the means of separating particles must be improved.

Enter Drazer and Frechette. “What we wanted to do was create a macro model built to scale that gives you a sifting process that is as slow as possible, so you could observe it,” says Drazer. The model would mimic, at larger scale, the sorting of nanoparticles a micron wide or smaller.

Two years ago, Drazer and Frechette were discussing the possible benefit of teaching kids engineering by using Legos as a visual aid. Then Frechette hit upon the idea of using Legos as larger stand-ins for the sifting action in the lab on a chip. “She thought it was cool and I thought it was cheap,” says Drazer, who adds the whole setup cost a couple hundred bucks. The ability to change the configuration of the Lego pieces—which serve as stand-ins for obstacles designed to sift particles on a chip—could replicate several nanoscale sorting scenarios, making the DIY setup even more attractive.

Using a six-inch square gray Lego pegboard backed with reinforcing Plexiglas as a macro model of a lab chip’s base, the duo then plugged in blue, oblong pieces smaller than a half-inch to represent obstacles that particles must travel around. They placed their gray Lego board—one that most kids would use as a flat floor or base—in an empty aquarium at a 90-degree angle, adjusting it a few degrees at a time. They found bricks left over from the construction of the new Mason Hall at Homewood to take up some tank space so they wouldn’t have to pour in so much glycerol—a thick, sticky, transparent liquid used as a medium in the experiment to slow down the actions of the balls.

After taking a picture of the board and its configuration, the duo and some graduate students spent five to 10 hours per week dropping steel balls of various sizes into the top of the Lego maze, noting their trajectories as they zigged and zagged through it, and jotting down in a series of spiral notebooks the time it took balls to reach the bottom. Using a magnet on the outside of the tank’s glass, investigators fished out the steel balls, washed them off, changed the Lego board’s layout of obstacles, and dropped the balls again—hundreds of times.

The boiled-down figures from those observations offered some answers—ones that could guide the development of labs on a chip that are more accurate and versatile. Drazer and Frechette saw how various configurations lead to predictable forces acting on the balls. “Our contribution is to say, maybe we can simplify this down to a model where you can see how separation tends to take place, and at different angles,” says Drazer.

Beyond the importance of finding a practical model, the two say they appreciate the attention their downscale methods have earned them. “It’s cute,” says Frechette. “You spend so much time and energy trying to devise these elaborate things for investigations. And here, we came up with something very simple that works.”