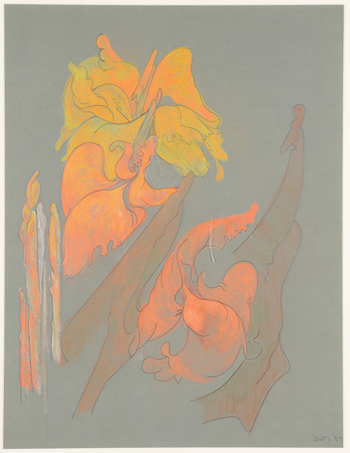 Imagine moving into a townhouse in Baltimore’s tony Bolton Hill neighborhood. It’s 1936 and the previous tenants have left behind a few things in the cupboards, in particular some drawings on paper— magnolia flowers blooming on a branch, a mother nursing a child—rendered in chalk, colored pencil, pastel, and graphite. Now imagine the previous tenants were F. Scott and Zelda Fitzgerald.

In 1932, the Fitzger­alds moved to Baltimore so Zelda could receive treat­ment for schizo­phrenia at Johns Hopkins Hospital’s Henry Phipps Psychiatric Clinic. The couple would reside in Baltimore for about five years. While Scott penned Tender is the Night, Zelda took to making her own works on paper, like this abstract of orange and yellow flames with flow­ers, dated October 6, 1934.

Mr. and Mrs. Sewell Weech found 10 of her drawings when they moved into the Fitzgeralds’ former residence at 1307 Park Avenue, a year after the Fitzgeralds left. Over the years they debated what to do with them—even contemplating destroying them—until two Johns Hopkins English professors convinced them of their cultural value. In 1974, the couple donated seven drawings to the English Department, and today they are stored in the collection at Evergreen Museum & Library.

This fall, Evergreen curator James Abbott mounted an exhibition of Zelda’s art in the museum’s Reading Room when the F. Scott Fitzgerald Society held its biennial conference in Baltimore for the first time. The four-day event highlighted Fitzgerald’s relationship with the city (he was, among other things, a descendant of Francis Scott Key) and featured several Hopkins professors and locales.

While the drawings are not exactly rare—Zelda was a prolific sketcher, according to Jacqueline O’Regan, curator of cultural properties at the Sheridan Libraries, and the pieces were assessed at just $1,500 each by Sotheby’s in the late 1980s—they are of historical and cultural significance. “They are fine examples,” O’Regan says. “They are sure-handed but not overdone. They have a very distinct vision.”