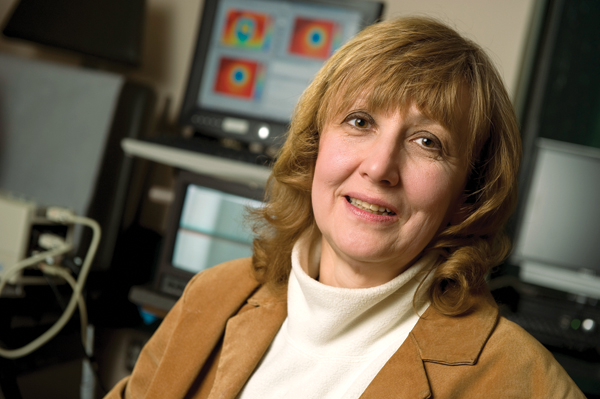 Melanoma is relatively rare, accounting for only 3 percent of skin cancer cases nationwide. But it leads to 75 percent of all skin cancer deaths. Each year 70,000 Americans are diagnosed with the disease, and though curable if found early, it kills one in eight patients, many within six to nine months of diagnosis. Physicians and researchers agree that nabbing the disease in its infancy, when it presents as a simple freckle or mole, is paramount in saving lives. But they have lacked technology that would enhance the current method of detection: the trained eye of the dermatologist, followed by a biopsy of suspicious skin spots.

A device invented by a researcher at the Whiting School of Engineering may fill the gap between what a physician can and can’t see. An infrared scanning camera outfitted with specially designed software can help doctors determine whether pigmented skin lesions exhibit the warmer temperatures that accompanymalignancies. By measuring the levels of metabolic activity in those lesions, physicians will have better information with which to guide treatments and, potentially, save lives. “We’ve found a way to measure differences in temperature between these tumors and normal tissue by using infrared technology,” explains Cila Herman, professor of mechanical engineering. Along with Rhoda Alani, a dermatologist formerly with the School of Medicine, and Muge Pirtini, an engineering doctoral candidate at Whiting, she has been honing the instrument for the past three years. “The idea behind it is to detect small changes in heat generation in the skin to diagnose cancer early enough—before it spreads,” Herman adds. “Our device will provide useful objective data to complement the subjective judgments of doctors.” The scanner could also lessen the cost and pain that come with the more than 3 million skin biopsies dermatologists perform each year in the United States by making many of them unnecessary.

The technology—called high-resolution infrared scanning, or HRIS—works by taking images of suspicious spots that dermatologists find during skin examinations. Most of them would normally be subject to biopsy. After cooling the spot and the area around it to 59 degrees Fahrenheit with a blast of cold air or a patch saturated with cold water, Herman and Pirtini take an infrared “movie” of the area, concentrating on the heat content of the lesion or mole for a set time, often the first 30 to 180 seconds, as the skin begins to warm back up. They measure the “thermal recovery” of a spot by looking at color codes that correspond to temperature. Cancerous lesions tend to be warmer, the result of a higher-than-normal amount of cell division and a greater blood supply. Benign moles recover from the cold at the same rate as regular tissue; cancers stay warmer. “When you see cancer, the lesion reheats differently than moles and the surrounding tissue,” says Herman. “That makes it suspicious.”

When fully developed, the scanner will be the first of its kind to aid dermatologists. There are no other FDA-approved instruments for detecting skin cancers. Herman and her team have already received a patent for their method of analyzing tumors using the HRIS and have applied for a patent on the scanner as well. “As technology and computers have developed, it has become more feasible to make an instrument like this,” says Herman. The method won’t answer every question about a cancer, Herman concedes. For example, HRIS likely won’t distinguish between types, so biopsies will still be necessary when cancer is diagnosed. But the emerging technology could eliminate the need for many invasive procedures by determining which suspicious spots aren’t malignancies.

Dermatologists she has talked to have become intrigued with the device’s possibilities, Herman reports. Medical instrument companies have begun to bite as well. “We’ve gotten some interest, but mostly from small companies,” she says. “Everybody wants a finished device. We’re at a stage now where we need more money to get it to that point.”