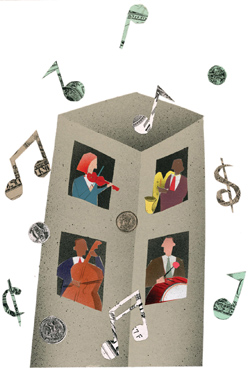 The hardships of a longtime friend have stayed with Tristan Rhodes for decades. The friend is a woman whose life took a dramatic turn after she came out as a lesbian to her family. “She is a great thinker and an extremely talented writer who would have been a great literary talent,” Rhodes says. “She came out to her parents when she was 17 and they kicked her out. She was disowned. She dropped out of college and was on the streets of New York living as best she could. Sadly, her story is not unique.”

This spring, Rhodes, a piano and conducting student at the Peabody Conservatory in the late 1960s, returned to campus to sign papers formalizing a new need-based scholarship. The Tristan W. Rhodes Scholarship Fund will support gay and lesbian musicians who lose financial support after coming out to their families or guardians. The $2 million bequest is one of the largest future commitments to the conservatory.

Around the country, the number of need-based scholarships for LGBT students remains few, but their number is increasing. Duke University established the Carolinas Gay and Lesbian Scholarship in 2000 to “encourage and reward involvement in the LGBT community and activism by members of the community at Duke,” while universities from the University of California, Berkeley to Ohio State now offer some form of scholarship aid to LGBT students. Many of the scholarship funds specify support to students who are active in the LGBT community. In 2003, Hopkins alumnus Michael Heinl, A&S ’73, created a scholarship for an undergraduate student of the Krieger School of Arts and Sciences who supports the school’s Diverse Sexuality and Gender Alliance group, the LGBT student organization on the Homewood Campus. The Rhodes scholarship is unique in that it does not award the funds based on activism but rather on circumstance. The fund is for “the benefit of students who are gay or lesbian and have been disenfranchised by their families and therefore have lost support for education expenses,” according to the language of the scholarship agreement.

Peabody Institute Director Jeffrey Sharkey says the scholarship fits with the open nature of the school. “Diverse people gather here because of their shared love for music and high level of ability,” he says. “Already, comments have reached me from students and faculty indicating their excitement about both the size of the commitment and its intended purpose.”

“I would love to see this scholarship not be necessary, but, sadly, I have seen that discrimination continues,” says Rhodes, 62 and now living in Vancouver, British Columbia. Hannah Pressley agrees. A cello performance major at Peabody, Pressley heads the school’s Gay-Straight Alliance, a student group meant to foster a supportive environment for the LGBT community. “I don’t know of any students at Peabody in this particular position, but I have known people who have been disowned by their families because they are gay,” Pressley says. “I feel like homophobia is really deep-seated and I don’t think people realize how long it’s going to take for that to change completely. [This scholarship] is a step in the right direction. It will change what people view as their options if they are in this situation and it’s a huge morale boost just in the fact that it exists,” she says.

When the Tristan W. Rhodes Scholarship takes effect in the future, it will supply an annual fund to qualified students who are gay, lesbian, bisexual, or transgender and who no longer receive tuition support from those who originally agreed to provide it. Should no student fit the above specifications, the scholarship may be awarded to any LGBT student in need of financial support for reasons other than disenfranchisement.

“I wanted there to be a safety net,” says Rhodes. “I wanted any talented kid who was disenfranchised to know there were funds available for an education.”