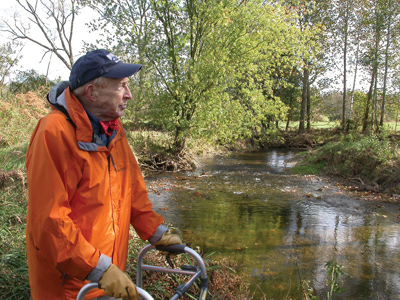 “Reds,” I said, “do you know that meander of Stony Run, the one off Linkwood Road, that’s eroding back toward that ugly apartment building?”

Reds smiled at me like I was his best friend because he smiled that way at everybody, especially if they wanted to discuss meandering rivers. Yes, of course, he knew this meander.

“Do you know how long before it cuts right under the apartment,” I said, “and the apartment falls into Stony Run?”

Reds was Markley Gordon Wolman; he had flame-colored hair that made “Reds” inevitable. He was chair of his department, twice interim provost, co-authored his field’s standard textbook, and was a member of both the National Academy of Sciences and the National Academy of Engineering (one of the 7 percent of their members who are). He was Hopkins family: He knew everyone; his undergraduate degree and most of his professional career happened here; his son, Abel, a conservation mathematician, got his degrees here and so did his father, Abel, a sanitary engineer who established the standard practice of chlorinating water. Reds himself was a fluvial geomorphologist, a student of rivers and how they change the earth.

Reds finished his doctorate at Harvard in 1953, back when ideas about how rivers behaved were mostly theory. Theory, Reds thought, would benefit from actual measurements: “You need to know something about something,” he would say. One feature of rivers needing measurement is the size of the sediment—sand, rocks, boulders—in their beds, so to measure size, Reds suggested what became known as the Wolman Pebble Count: Take a step into the river, reach down to your toe, look away, pick up the rock nearest your toe, and measure its width. Repeat until you’ve measured 100 rocks. The pebble count paper became the third most highly cited in geomorphology. In fact, of the 10 most highly cited papers, Reds ended up with four of them.

Another of that four, written a few years later, was about which floods set a river’s size. Floods erode a river’s banks on one side and deposit sediment on the other, so that over time the river moves like a snake over its flood plain. But even as it moves, its shape and size remain surprisingly the same. Reds found that the floods that control that shape and size are not the big historic ones but the modest ones every year or two that exactly fill the riverbanks. That rivers of all sizes in all landscapes follow this same rule is remarkable, says Reds’ fellow geomorphologist Peter Wilcock, “and we still can’t explain why that happens.”

A few years after that, Reds moved his science into the untidy world of policy, arguing with the newly forming environmental movement that identifying the sources of pollution wasn’t enough. You also need to understand the operation of the whole system—what’s being added, what’s taken away, how the river responds—and how that system changes with time and urbanization. Reds kept the state of Maryland apprised of the overloading of its rivers, and the state drew up some of the first regulations, which the rest of the country adopted. Now storm water control is the law everywhere, and no one builds a house without planning for ponds to catch water and black fabric fences to trap the sediment washing off treeless construction sites. Over the years, Reds was a member of innumerable national and international boards and panels, all advising on various environmental policies, even policies on oysters.

When Reds came to Hopkins in 1958, he turned the Department of Geography into the interdisciplinary Department of Geography and Environmental Engineering—DOGEE, pronounced “doggie”—to include geoscientists, engineers, and social scientists. His idea was that specialists in the earth’s processes and in construction could affect policy only with help from other specialists who knew how people behave and why. The other idea was to train students who knew the substance and languages of all disciplines needed to create good policy. In the whole country, the department remains nearly unique.

Reds would take his students on weekly field trips, park them in a likely spot, and ask, “What’s that?” He’d lean against a tree and smoke a cigar until they told him what it might be, then he’d say, “How’d it get there?” thereby teaching them to read in a landscape its history, its story. Reds thought his students were exceptional, and so were his colleagues and friends. Even the people who cut down trees were undoubtedly good and delightful people. He had a high opinion of the human race.

For more on the life of Reds Wolman, including the video shown at his memorial service, please view the University tribute page.