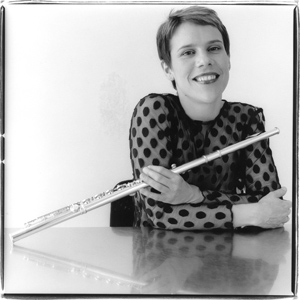 Even before Karen Evans Moratz had finished writing the book Flute For Dummies, critics were scoffing at the idea of a simplified flute manual for such a demanding instrument. They called it the literary equivalent of fast food.

Moratz, who’s been the principal flutist with the Indianapolis Symphony Orchestra (ISO) for 21 years, says she was surprised by the vitriol, but it only strengthened her resolve to write a comprehensive book for the beginning flute player that would be straightforward without being, well, dumb. “The term ‘dummies’ is really more one of endearment than an insult,” says Moratz, unabashed to have a shelf at home full of other “Dummies” titles, including books on yoga, football, and personal finance. She met an editor for the series—an amateur flute player—at a flute club gathering, and learned that Flute For Dummies was in the planning stage. It just needed a writer.

Moratz submitted a proposal and was thrilled to get the job. “It was just very me,” she explains of the book’s down-to-earth approach to teaching. “My attitude has always been that it’s just a flute. People shouldn’t be intimidated by it.”

She wrote the manuscript over four Red Bull–fueled months. She was on break from teaching at Butler University’s Jordan College of Fine Arts but still performing with the symphony.

Originally from Pasadena, California, Moratz joined the ISO in 1989, following her training at Peabody (where she studied with renowned flutists Britton Johnson and Timothy Day), study in Germany, and training with the New World Symphony in Miami.

When her book was released in December, colleagues’ skepticism generally turned to admiration. Positive reviews included one on FluteFocus.com, which concluded, “After checking out this book, one would no longer be a ‘Dummy.’”

Then world-famous Irish flutist Sir James Galway—“the man with the golden flute”—posted a review that delighted (and vindicated) her. “I am very impressed,” he wrote. “This is a book everyone should own who plays the flute.”