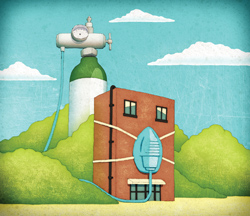 When Davis Bookhart and Lawrence Kilduff needed to figure out how to reduce Johns Hopkins’ carbon footprint, they went looking for heavy breathers. Bookhart is Hopkins’ environmental stewardship manager, and Kilduff is executive director of the Office of Facilities Management. A “heavy breather” is a building that takes in, conditions, and puts out large volumes of air—a form of respiration that consumes a lot of power and creates a disproportionate amount of carbon dioxide emissions. Bookhart and Kilduff identified 45 of them on the various Hopkins campuses, and they will be prime targets for improvement as part of an ambitious sustainability plan Hopkins announced last March.

The university estimates that in 2008, its many buildings pumped 259,000 metric tons of carbon dioxide into the atmosphere. It projects that without action, that figure will rise to more than 273,000 metric tons per year over the next 15 years. The goal of the new plan is to cut annual emissions to 134,700 metric tons by 2025, a reduction of more than 50 percent. The plan requires an initial investment of $73.8 million but projects cost savings through greater efficiency and resource conservation of $10.3 million per year.

Two years ago, the university convened a sustainability task force consisting of trustees, faculty, staff, and students, as well as members of the Baltimore business community. That task force directed energy audits of 276 buildings on every Hopkins campus in the Baltimore-Washington area. Among the heavy breathers were the Bloomberg Center for Physics and Astronomy building and many of the large basic science buildings. Problems were not confined to older buildings. Kilduff points out that after only about 10 years, controls on things like heating and air conditioning (HVAC) systems begin to “drift,” resulting in growing imprecision and inefficiency.

He and Bookhart plan to reduce carbon emissions by applying a variety of technologies. A clean, efficient cogeneration power plant, fueled by natural gas, will begin producing electricity at Homewood later this year. Two more cogeneration plants are slated to come online in East Baltimore late next year for the medical campus. Measures to reduce power consumption in all facilities will include upgraded HVAC and lighting systems; new, tighter windows; more efficient laboratory equipment; and greater use of solar power. Other critical elements of the master plan include a sustained campaign to encourage faculty, staff, and students to reduce energy consumption; an effort to reduce power consumption by the university’s energy-intensive information technology infrastructure; programs to apply Hopkins knowledge and research to Baltimore’s and Maryland’s sustainability efforts; and creation of a new interdisciplinary Johns Hopkins Environment, Sustainability, and Health Institute to conduct climate change research and teach students, including those participating in the university’s new undergraduate major in global environmental change.

In a prepared statement released by the university, President Ron Daniels said, “Global climate change is one of humanity’s greatest challenges. The earth’s rising temperatures will, over decades to come, affect where and how we live, the ecosystems we inhabit, our quality of life, and even our health. Facing this challenge head on is our shared responsibility, especially as residents of the developed world. But universities have a special role in our society and a special responsibility. We are institutions that discover, that educate, and that, often, set an example. When it comes to global climate change, Johns Hopkins will be a leader in all three.”