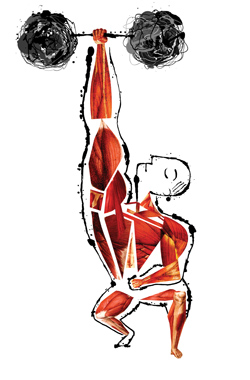 Last fall, Rajiv Mallipudi, Eng ’09, took a late-night and somewhat fateful stroll to the apartment of Roosevelt Offoha, whom he had recently met through a mutual acquaintance. Mallipudi wanted to recruit Offoha, a first-year medical student at the School of Medicine and an ex-football player with a superhero physique, to his new passion—powerlifting. An archetypal Type A personality, Mallipudi wouldn’t take no for an answer. And, like any good Hopkins student, he came packing research.

“I just showed up at his door with a list of national [powerlifting] records,” says Mallipudi, a biomedical engineering graduate who is currently working toward his master’s degree in reproductive and cancer biology from the Bloomberg School of Public Health. “I sat down and told him, ‘You will break these. You can, you will.’”

It took awhile, but eventually Offoha gave in. The two trained together the following day in a marathon session. Four months later, in back-to-back statewide competitions, Offoha broke 10 national powerlifting records. No slouch himself, Mallipudi set eight state records at the USAPL Maryland State Powerlifting and Bench Press Championships, held in February in Annapolis. Each won gold medals in their respective weight divisions.

The numbers themselves could cause back strain. Mallipudi, 23, a 5-foot-2 bundle of power who weighed in at 146 pounds, lifted 253 pounds in the bench press, 358 pounds in the squat, and 446 in the dead lift.

Offoha, a soft-spoken 24-year-old who stands 5-foot-10 and com­peted at 215 pounds, benched 430, squatted 606, and for the dead lift hoisted a bar weighing 672 pounds—a grand total of 1,708 pounds. He topped state records in his age group, weight, and in several “open” categories. The Baltimore native would go on to break 10 national records in the 220-pound class at the Pennsylvania State Powerlifting Championships a few weeks later. For his off-the-charts performance, Offoha qualified for the Arnold Sports Festival, the largest multi-sport event in the nation.

The sport of powerlifting centers on brute strength—how much weight you can lift—in the three events. It differs from weightlifting, which requires a high degree of technical proficiency. (As an example, you’ve probably seen the “clean and jerk” event, in which the athlete brings the bar to his shoulders, then lifts it above his head.) In these competitions, judges are looking for perfect position and form.

Both Mallipudi and Offoha were weightlifters in high school. Offoha did it for football. Mallipudi wanted the extra strength to play ice hockey, and later for bodybuilding. Mallipudi says he progressed to powerlifting during his sophomore year of college when he met someone in a local gym who pushed him toward the sport, not unlike what he did to Offoha. “He told me, ‘Wow, you’re really strong. You’d be great for powerlifting,’” he says.

Despite his initial reluctance, Offoha is now glad Mallipudi twisted his arm back in October, he says. “When I won that competition and broke those records, I had never felt like that before. It was a complete adrenaline surge that day.”