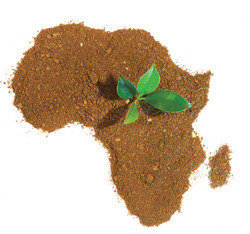 The light green melon called egusi is known for the richness found in its seeds. In the savannas of southwestern Nigeria, the seeds are prized for their flavor—they taste a bit like pumpkin seeds—and for the powder they produce when dried and ground up. The pungent powder spices up soups. Egusi seeds are also rich in vitamins and minerals—a bonus in a region where getting enough nutrition is a daily travail.

But because egusi isn’t easy to process, it’s not eaten as widely as it could be. Traditionally, women working in tandem take several hours harvesting the melons, separating the seeds from the flesh, drying them, grinding them, and allowing them to steep in salt to extract the oil, another important food product. Complicating the issue is a short dry season that leaves only a small window for drying the seeds in the sun. What’s more, because of a dearth of technology, it’s difficult to make more than one gallon of oil at a time. As a result, production remains a local, farm-by-farm phenomenon, and not a success story in the ongoing war against malnutrition in Africa.

That, in a nutshell, is the conundrum that some who battle hunger in Africa face: Though native foodstuffs that provide a wide range of nutrients have been available ever since the first humans walked in Africa’s Rift Valley several million years ago, many remain relatively untapped—or are disappearing—because science hasn’t focused on improving them.

“It’s somewhat disconcerting that, at a time when the nutritional science of the moment in the West has to do with local, fresh, and a large variety of foods, we’re not seeing it in places like Africa that could really use that kind of thinking,” says Jane Guyer, an economic anthropologist at Johns Hopkins. Guyer, who studies the life cycle and money streams of African farms, served for several years on a National Academy of Sciences panel that oversaw the production of three large volumes that described what were termed “the lost crops of Africa.” Such food plants, the series contended, are often present in the landscape—not truly “lost”—but aren’t being used sufficiently to make a dent in Africa’s food problem. Of the 1 billion people worldwide classified as “undernourished” by the United Nations Food and Agriculture Organization, more than 300 million live in Africa.

Too much of the effort to feed Africans has been based on large-scale farming of staple crops, such as maize and rice, the panel contended. Aid agencies and national governments haven’t focused enough on developing a variety of food plants, often overlooking valuable crops in their midst. “Part of the problem is the perception that people need calories and protein,” says Guyer. “In actuality, many people need the nutrition of a wide variety of foods.”

Many local people cultivate native food plants in their gardens and farms, she says. Children often eat wild fruits, like those of the marula tree, the juice of which contains four times the vitamin C of an orange. “The know-how of the local people of the world is huge,” Guyer says, “and it’s underutilized.” The National Academy’s panel hoped that scientists could tap local people for expertise on growing the crops, and then inform local leaders and others to encourage the planting of them, she adds.

Even though the panel ended its work two years ago, one of its leaders says that its work is still bearing fruit. The books—one on grains, a second on vegetables, a third on fruits—“provided an incentive and a legitimization for researchers to work with these plants,” says Mark Dafforn, the study’s director. The project helped boost the production of sorghum throughout Africa, he says. On the southern part of the continent, local women collect marula, and then sell it to a company that makes Amarula, a liqueur popular in Africa and the West. “It’s a good source of cash for them,” Dafforn says.

Previous efforts Dafforn was involved with, including discovering the “lost crops of the Incas,” taught him that until native foods gain wide acceptance they are often looked down upon by various populations, native and otherwise. “It’s kind of like the peanut was here for a good while,” says Dafforn. “It helps when foods catch on elsewhere so that there’s a market for them. One of our leaders on the Inca project said that for a food in Lima to become popular in Cuzco, it has to travel through New York. We’ve seen that kind of success with quinoa, which you can buy at Whole Foods now.”

Guyer says the next step for achieving that kind of success with African crops is to link people with technical know-how to others who understand specific food plants. For example, a company in Austria has developed an efficient method for extracting oil from a rare type of pumpkin seed. That technology may be adaptable in the case of the egusi seed. Getting the Austrians to work with Nigerians would be a small but important step toward increasing consumption of the wholesome egusi melon. Multiply that by several other projects and you begin to have an overall effect on hunger.

“We’re not talking about heirloom tomatoes here,” says Guyer. “These are crops that are really fundamental to the well-being of millions of people.” She adds that poor countries may soon face new agricultural challenges—ones that may be met with the help of native food plants: “With climate change worries staring right at us, these crops are on the doorstep of science, just waiting to be worked with.”