The Buzz: What Bees Tell Us About Global Climate Change
June 2, 2010 |  by Sharon Tregaskis

Standing in the apiary on the grounds of the U.S. Department of Agriculture’s Bee Research Laboratory in Beltsville, Maryland, Wayne Esaias, A&S ’67, digs through the canvas shoulder bag leaning against his leg in search of the cable he uses to download data. It’s dusk as he runs the cord from his laptop—precariously perched on the beam of a cast-iron platform scale—to a small, battery-operated data logger attached to the spring inside the scale’s steel column. In the 1800s, a scale like this would have weighed sacks of grain or crates of apples, peaches, and melons. Since arriving at the USDA’s bee lab in January 2007, this scale has been loaded with a single item: a colony of Apis mellifera, the fuzzy, black-and-yellow honey bee. An attached, 12-bit recorder captures the hive’s weight to within a 10th of a pound, along with a daily register of relative ambient humidity and temperature. 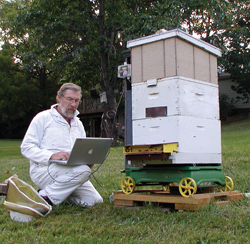 Esaias downloads data from bee hives at Mink Hollow Apiary, which he maintains in his backyard in Highland, Maryland Photo: Elaine Esaias

On this late January afternoon, during a comparatively balmy respite between the blizzards that dumped several feet of snow on the Middle Atlantic states, the bees, their honey, and the wooden boxes in which they live weigh 94.5 pounds. In mid-July, as last year’s unusually long nectar flow finally ebbed, the whole contraption topped out at 275 pounds, including nearly 150 pounds of honey. “Right now, the colony is in a cluster about the size of a soccer ball,” says Esaias, who’s kept bees for nearly two decades and knows without lifting the lid what’s going on inside this hive. “The center of the cluster is where the queen is, and they’re keeping her at 93 degrees—the rest are just hanging there, tensing their flight muscles to generate heat.” Provided that they have enough calories to fuel their winter workout, a healthy colony can survive as far north as Anchorage, Alaska. “They slowly eat their way up through the winter,” he says. “It’s a race: Will they eat all their honey before the nectar flows, or not?”

To make sure their charges win that race, apiarists have long relied on scale hives for vital management clues. By tracking daily weight variations, a beekeeper can discern when the colony needs a nutritional boost to carry it through lean times, whether to add extra combs for honey storage, even detect incursions by marauding robber bees—all without disturbing the colony. A graph of the hive’s weight—which can increase by as much as 35 pounds a day in some parts of the United States during peak nectar flow—reveals the date on which the bees’ foraging was most productive and provides a direct record of successful pollination. “Around here, the bees make their living in the month of May,” says Esaias, noting that his bees often achieve daily spikes of 25 pounds, the maximum in Maryland. “There’s almost no nectar coming in for the rest of the year.”

A scientist by training and career oceanographer at NASA, Esaias established the Mink Hollow Apiary in his Highland, Maryland, backyard in 1992 with a trio of hand-me-down hives and an antique platform scale much like the one at the Beltsville bee lab. Ever since, he’s maintained a meticulous record of the bees’ daily weight, as well as weather patterns and such details as his efforts to keep them healthy. In late 2006, honey bees nationwide began disappearing in an ongoing syndrome dubbed colony collapse disorder (CCD). Entire hives went empty as bees inexplicably abandoned their young and their honey. Commercial beekeepers reported losses up to 90 percent, and the large-scale farmers who rely on honey bees to ensure rich harvests of almonds, apples, and sunflowers became very, very nervous. Looking for clues, Esaias turned to his own records. While the resulting graphs threw no light on the cause of CCD, a staggering trend emerged: In the span of just 15 seasons, the date on which his Mink Hollow bees brought home the most nectar had shifted by two weeks—from late May to the middle of the month. “I was shocked when I plotted this up,” he says. “It was right under my nose, going on the whole time.”

The epiphany would lead Esaias to launch a series of research collaborations, featuring honey bees and other pollinators, to investigate the relationships among plants, pollinators, and weather patterns. Already, the work has begun to reveal insights into the often unintended consequences of human interventions in natural and agricultural ecosystems, and exposed significant gaps in how we understand the effect climate change will have on everything from food production to terrestrial ecology.