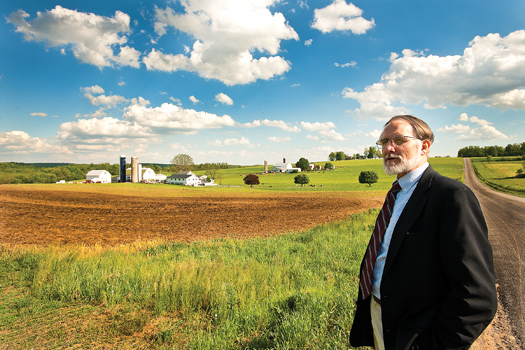 Richard Kelley travels through the rolling hills of southern Pennsylvania in search of clues to rare genetic disorders that, still too often, afflict the Amish and Mennonite children he treats. Photo: Steve Spartana

“I got into investigating and treating these rare diseases because I saw there was a need for it,” says Kelley. A vigorous man at 61 who maintains a neatly trimmed white beard and parts his dark hair well over to one side, Kelley calls himself a “dysmorphologist”—one who studies how the body’s functions can go wrong and lead to deformities, injuries, and death. “It’s kind of a fun discipline,” he says. “If you know what you’re doing, you can walk into a room and say, ‘Johnny has this.’”

Starting nearly 30 years ago at Children’s Hospital of Philadelphia, Kelley began to see Amish and Mennonite children who suffered from rare diseases. Most involved their bodies’ inability to break down certain substances. Listed as metabolic disorders, several variants of the diseases that affect Amish and Mennonite children have evocative, sometimes innocuous-sounding names—but potentially deadly consequences. Among the Old Order Mennonite, a particular type of maple syrup urine disease—called that because the urine and earwax of its sufferers smells like maple syrup—had ravaged children for generations, killing them or leaving them paralyzed. Because those who suffer from the disease cannot metabolize protein, their brains become damaged. A type of glutaric aciduria, a genetically based disease that afflicts some Amish children, did similar, irrevocable damage.

Until Kelley and D. Holmes Morton, a former researcher at Kennedy Krieger and Kelley’s protégé, opened the clinic, parents would often wait until a child’s disease was in the late stage before taking him or her to a hospital. “There were all kinds of wrong diagnoses that people were given,” Kelley recalls. “No one saw those diseases as metabolic or biochemical. Doctors treated them as if they were the result of an acute insult,” such as a fall. Many children ended up in wheelchairs or died.

Not long after the clinic opened, Kelley and Morton discovered the biochemical cause of those types of maple syrup urine disease and glutaric aciduria. What’s more, Kelley began to realize that by putting sick children on a regimen that limits their intake of protein to almost nothing and gives them the essential amino acids they initially lacked, he could help them through periods of crisis, allowing them to lead mostly normal lives. The physicians’ work—which led to treatments for diseases that were once labeled as progressive and fatal, and introduced a method for screening newborns for them—contributed to a decrease in the injury rate among glutaric aciduria patients from 95 percent in the 1980s to about 15 percent today.

“I like working with metabolic diseases because, chances are, you can find something to help,” says Kelley. “It’s gratifying to find that you can give them something simple to counteract a disorder.”

Kelley’s work has led to regimens or therapies for about a dozen different genetic maladies. But he, Holmes, and others at the clinic aren’t saviors. They admit to being vexed by several disorders that give up their secrets slowly, if at all. Particularly difficult are certain diseases that don’t have anything to do with metabolism. Joshua’s illness, for example, has long defied a cure. Chicken breast disease is not a metabolic disorder but one of a trickier group of genetic illnesses marked by a deficiency of the structural proteins that build muscles. To fix it, a doctor would need to use specific gene therapies to get the protein into each muscle, but those haven’t been developed yet. And no regimen of amino acids or protein restriction will help Joshua.

THE DISORDER THAT THREATENS Joshua’s life came to America with about 200 people during one of several waves of immigration from Germany and Switzerland in the early decades of the 18th century. A subgroup of the Anabaptist communities that were heretical in the eyes of the Catholic Church, the Amish fled persecution and answered the call of William Penn, who had traveled along the Rhine River encouraging farmers to come to the New World.