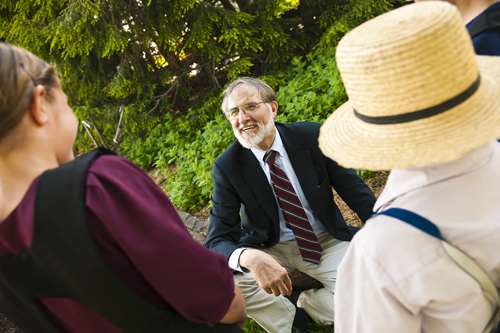 As he parks next to a large white farmhouse that would fit comfortably into a 19th-century still life, Richard Kelley smiles at a rust-colored retriever, an old friend that stirs from an early spring sunbath to greet him. Kelley knows this old place well. He’s been dropping by regularly to check on Joshua since the boy was little more than a month old, when his grandmother noticed that his body quavered slightly but uncontrollably. The grandmother had heard tales of similar symptoms in Amish toddlers who had died. Kelley has been visiting Joshua, an attentive boy with an impressive hank of blond hair swept across a head that lists to the left because of his condition, for 18 months now. This is one of his many house calls to Amish families who refuse to use modern devices, such as telephones, and who have very young, very sick children at home.

After examining Joshua for the first time, and later performing a DNA test, Kelley was forced to conclude that the grandmother’s disturbing hunch was right. The boy suffered from a rare and deadly form of nemaline myopathy, an inherited muscular disorder. The variant of the disease that afflicts the Amish, who have named it chicken breast disease, raises the sternum straight up from the chest symmetrically, making the breastbone much more prominent. It also stalls the growth of muscles in infants. Because they lack a structural protein that builds certain muscle fibers, chicken breast disease children eventually become too weak to breathe. In most cases, a cold or other illness will be too much for them. All of them die, most by the age of 2. 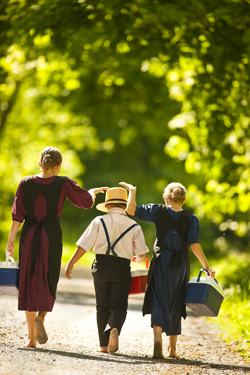 As Joshua nears that grim milestone, Kelley, having been warmly received inside, checks for signs of the disease’s progress. He reaches into his bag for the pediatrician’s simplest tools. “When Josh heard you were coming, he started playing with his hammer,” says Joshua’s mother, a cheery young woman dressed in a traditional dark blue frock and bonnet. Kelley tests Joshua’s reflexes with taps of his hammer, then examines his torso. He finds it noteworthy that, instead of the usual rise of the chest, Joshua sports only one small bump near his sternum where a rib seems to be poking up.

Years of doing highly specialized clinical work have enabled Kelley to see such differences. Of the 70 children diagnosed with chicken breast disease over the past generation, Kelley has personally treated about half, including a family in which four siblings have died from the disease over the past 11 years.

The form of nemaline myopathy Joshua suffers from is one of about 100 disorders that are either uniquely found in small numbers among the Amish and Mennonite children of Lancaster County, Pennsylvania, or which affect only them and other tiny populations around the world. All of the disorders are rare and based in the genetics of people who have essentially inbred, as is the case with several orders of Pennsylvania’s Amish and Mennonites who have maintained insular, self-reliant communities here for the past 13 generations.

Kelley, a professor of pediatrics at the Johns Hopkins School of Medicine and a researcher and physician at the Hopkins-affiliated Kennedy Krieger Institute, has made a career out of tracking those diseases down. Trained in pathology and genetics in addition to pediatrics, Kelley runs the Mass Spectrometry Lab at Kennedy Krieger, where he searches for the biomedical basis of genetic disorders, like the one that threatens Joshua’s life. Because funding for clinical researchers of rare diseases is a rarity in itself, he uses income from the lab—which provides testing for patients of dozens of Johns Hopkins physicians, as well as services for doctors seeking information on patients with rare diseases around the world—to bankroll his work in the field.

Several days per month, Kelley performs research by seeing patients of the Clinic for Special Children, which he helped found 20 years ago in an Amish-raised, post-and-beam structure. During his visits to homes and his examinations of children brought into the clinic with unusual health problems, Kelley tracks down clues to oddball diseases that linger in the twists and turns of a genetic matrix. At the same time, he provides a bridge between the anti-modern and the modern, the archaic and the cutting-edge. In Lancaster County, Kelley navigates along two-lane roads—black ribbons that lace through endless undulating acres of well-tended spring green, and which regularly include horse-drawn buggies—to undertake medical detective work that few clinicians or academic researchers from beyond Pennsylvania Dutch country have cared to understand. The children he checks on come from communities that want to shield their young from the outside world—from people whom the misnamed “Dutch” have, in turn, wrongly called “the English.”