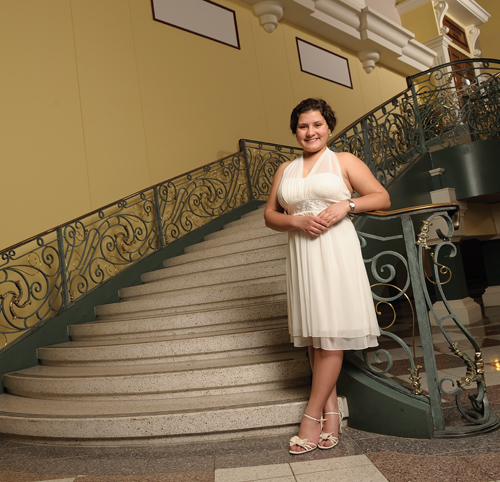 The first piano Dasha Bukhartseva ever played was an old, poorly tuned upright that sat in her aunt’s living room in Vishniaki, a small village in Ukraine. Barely a toddler, she’d waddle over to it, open the lid, and bang away at the keys for hours.

At age 8, having moved with her mother, Natasha, to Odessa, she started formal lessons. Though Natasha didn’t imagine her daughter would ever devote her life to the piano, she thought playing an instrument would be enriching for her, and it might provide some needed distraction from the crime and poverty of post-Soviet Union Odessa. But music was much more than a distraction for Bukhartseva. Her interest was instant and powerful—“I felt it was the thing I’d do all my life,” she says—and her talent quickly became obvious. Just three months after Bukhartseva began taking lessons, she won her first competition.

Without a piano of her own, however, her progress was limited. Bukhartseva could only practice when her mother left her job early and drove her to the music school. As she began tackling more difficult pieces, such intermittent practice was not enough. So her mother devised a solution—she took a long piece of cardboard and drew a piano keyboard on it. Bukhartseva practiced on it for hours on the days she couldn’t make it to the music school. “I loved that paper keyboard,” says Bukhartseva.

For a brief time, Bukhartseva had a piano of her own, an ancient upright donated by an equally ancient man Natasha met on a bus. But that was short-lived. Bukhartseva and her mother were abruptly evicted when their landlord rented their room, right out from under them, for a higher price. “They’d thrown away all our food, and our stuff was in boxes,” says Bukhartseva. “We slept on chairs in the lobby for that night.” Mother and daughter ended up staying at the music school. The director gave them a key, and for almost six months they slept in a classroom. The living quarters were cramped and uncomfortable, but for Bukhartseva, there was one tremendous benefit: “When I woke up,” she says, “it was pianos everywhere.”

In September 2006, Bukhartseva participated in an outdoor concert in Odessa. Dan and Lynne Levinson, an American couple whose cruise happened to dock nearby, were in the audience. They couldn’t believe what they heard—such a waiflike creature producing such a powerful sound. “She was this tiny thing, only 14,” recalls Dan Levinson. “And she blew everyone’s socks off.” When the couple went to congratulate Bukhartseva after the concert, they told her about a famous music festival in their hometown of Aspen, Colorado. Half-joking, they asked her if she’d like to play there. Bukhartseva’s eyes brightened. “When do we go and what do I play?” she asked in English, a language she’d studied since grade school.

The couple hadn’t meant the question as a serious invitation, but they found themselves not wanting to disappoint the young pianist. They were charmed by her manners, impressed by her playing, and moved by the difficulties she had faced. With the help of scholarships from the Aspen Music Festival, the Levinsons were able to bring her and her mother to Aspen for a summer. Bukhartseva took lessons from Ann Schein, a renowned pianist and former Peabody Institute professor, and practiced on the best pianos she had ever played.

She also discovered certain basic problems with her technique. Specifically, she hadn’t developed the wrist and finger strength necessary to play high-quality pianos with weighted keys. There was much work to be done. The Levinsons invited Bukhartseva, along with her mother, back to Aspen for a second summer, then set them up in New York City so Bukhartseva could study in Juilliard’s pre-college program and prepare for conservatory auditions. Fundraising among their friends, the Levinsons were able to pay for an apartment and Bukhartseva’s musical training.

Bukhartseva prepared meticulously for her Peabody audition. For a Mozart sonata, she practiced the opening gesture hundreds of times a day, trying to find the perfect dynamic, tone, and articulation. “I highlighted every voice of the fugue in a different color—four colors for four voices,” she says. “Then on YouTube I watched performances by Richter, Horowitz, and other pianists I like.” She nailed the audition.

Now a sophomore at Peabody, Bukhartseva is still working to overcome some of her bad musical habits. “One of her challenges is correcting some basic technical issues that result from her somewhat unusual background,” says her teacher, Peabody faculty member Yong Hi Moon. “But she plays with great spontaneity and expressive power.”

And she does so on a Steinway Grand.

New York–based freelancer Nick Romeo writes about classical music for Carnegie Hall and is working on a book about young musicians.