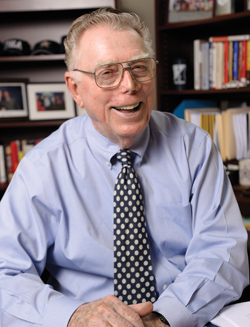 Good leadership can be learned in countless ways—while fighting a war, rising through the corporate ranks, working to improve a public school system. So says Joseph McGowan, the director of federal programs for the School of Education’s Division of Public Safety Leadership (DPSL).

For the past 12 years, McGowan, who will turn 84 this summer, has organized the Gettysburg Staff Ride, a three-day onsite study of the leadership choices made by the North and South throughout the 1863 fight. About 10 times a year, McGowan and his team of management experts bring to the Pennsylvania battlefield groups of 25 to 30 employees from federal agencies, including the Secret Service and the DEA.

A few years ago, McGowan personally demonstrated one important leadership lesson: The boss sometimes needs to get down in the trenches. He became a DPSL graduate student, one of the oldest in Johns Hopkins University’s 134-year history. (He’d already earned a BS in economics from the University of Pennsylvania’s Wharton School in 1952 and an MS in general administration from the University of Maryland in 1988.) To better evaluate and improve the program he helps oversee, he says, “I thought I should go through it, not to audit it, not to sit in the back, but as a member of the class. Feel the pain, if you will.”

He studied along with the others, even learning to write papers on a computer. The last time he was at school everyone had typewriters. At Wharton, he’d used pen and ink.

Before he went to college, McGowan went to war: He enlisted in the Navy at age 17 and shipped out to the South Pacific for almost two years. He later spent 31 years as a senior executive at Bethlehem Steel, specializing in helping labor and management work toward, as he puts it, “collaborative problem solving, trying to find the middle-ground.” He also was a member of the board of education of Baltimore County for nine years, five of them as board president, then joined the board of the Baltimore County Police Foundation.

When McGowan retired from the corporate world, Baltimore’s chief of police invited him to coordinate leadership education programs for the force, which led to a job as director of the Baltimore County Police Department’s training academy—a good fit for someone who’d become well-versed in both education and public safety.

McGowan was among the group to help Sheldon Greenberg found the DPSL 15 years ago, and since then the Gettysburg Staff Ride has grown extremely popular among federal law enforcement officials. It keeps evolving as McGowan finds ways to enhance the experience. “You’re always looking for areas of improvement,” he says, citing yet another leadership lesson: “Never go with the status quo.”