Crocs, hippos, and the evolution of the brain
September 3, 2010 |  by Michael Anft 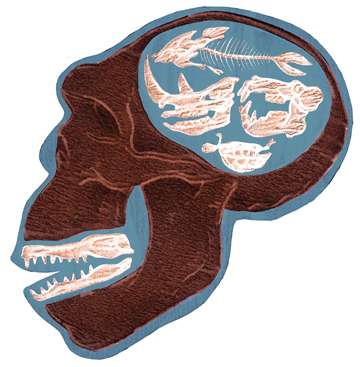 How human brains became large enough during the march of evolution to vault our ancestors ahead of chimps and other primates has long been a puzzle. In an attempt to fill in the pieces, scientists have focused on the prehistoric diet. Because the brain is an energy guzzler—in modern humans, it requires 20 percent of the body’s energy to effectively operate, even though the organ makes up about 2 percent of the body’s weight—scientists have  theorized, but lacked evidence, that an early precursor to modern humans regularly ate an array of foods that included large amounts of animal flesh. Such a diet would provide the energy and nutrients needed, over time, to expand the brain. It would also help explain how hominins, our ancestors of millions of years ago, evolved into Homo erectus, a successful and relatively brainy link in the evolutionary continuum that has so far led away from monkeys to the development of Homo sapiens.

Now, a research team that delved 20 meters deep into the Turkana Basin region of northern Kenya has uncovered evidence of such a diet among a trove of stone tools, fossils, and soil. The research team, which included Naomi Levin, an assistant professor of Earth and planetary sciences at the Krieger School, found that 2 million years ago the basin was grassland and the hominins who lived there ate several species of animals, including “brain food”—fish, aquatic reptiles, and mammals. Scientists also discovered cut marks on animal bones that indicate stone tools were used for butchering, and they found samples of the tools. The team, made up of scientists from Australia, Kenya, South Africa, the United Kingdom, and the United States, reported its results in the June 1 issue of the Proceedings of the National Academies of Science.

“What’s exciting is that the hominins were eating a very wide range of things—they were very opportunistic,” says Levin, a geologist whose role on the team was to analyze the soil and bits of fossilized teeth that might explain hominins’ diet and environment.

“That’s a sign of human success. People probably assumed that Homo erectus’ predecessor had access to these resources, but we needed to prove it.”

Growing larger brains over long periods of time would require pre-humans to regularly use as many sources of nutrition as possible. Among the animals hominins consumed, the research team discovered, were crocodiles, hippopotami, and turtles. All are especially rich sources in the long-chain polyunsaturated fatty acids crucial to brain growth. Because the human brain’s development is so central to scientists’ conception of evolution, the subject has garnered a large amount of research interest from archaeologists, anthropologists, evolutionary biologists, and geologists.

The Turkana Basin research team did its work during 10 days in February 2007. Since then, Levin and the others have been analyzing the findings. Her job has been to look for clues within one-square-inch bits of excavated earth by analyzing isotopes that lie within soil and bone. The Turkana Basin now is dry and sere, but it wasn’t 2 million years ago. Levin, who studies prehistoric climates, discovered oxygen and carbon isotopes in animals’ fossilized teeth that reveal they ate grasses. Using an “aridity index” she developed in 2006, Levin also determined that many of the mammals at the site, including hippopotami, had teeth containing isotopes that indicate they lived in watery areas. “This is important because it places the record of hominin behavior in an environmental context,” she says.

Other members of the research team theorize that hominins didn’t hunt their prey but scavenged dead or dying animals or ones injured by predators, and perhaps corralled catfish, hippopotami, and water turtles when water levels dropped. The team found that hominins also devoured antelopes, rhinoceroses, and other land mammals, while avoiding predatory mammals long enough to pass on their genes to the next generation. Because the research team lacks evidence of fire at their dig site—a common woe for anthropologists seeking to pinpoint when fire was first used—they assume that the meat was consumed raw.

Not found at the site were bones of the hominins. “We don’t have the hominin fossils,” laments Levin. “They didn’t die at the Turkana site, or if they did, we can’t identify them.”