Did asteroids bring water and life to Earth?
September 3, 2010 |  by Michael Anft 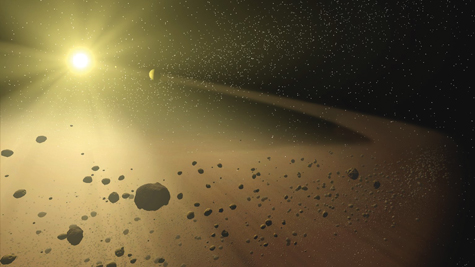 An artist’s concept of the asteroid belt. These orbiting rocks may harbor water in unexpected quantities. Photo: NASA

Space scientists have put several men on the moon, robotically explored the farthest reaches of the solar system, and calculated the age and composition of the universe. But they’ve had a hard time nailing down two of the most basic questions about life on Earth: How did the surface of the planet become mostly water? Especially since the massive collision that formed the moon 4.5 billion years ago would have vaporized any water then present? And how did Earth acquire the organic compounds that cooked up life? The common wisdom has been that comets, cooled by ultra-frosty temperatures beyond the solar system, smashed into Earth sometime after the moon’s creation, bringing water in the form of ice, possibly along with organic matter essential to the creation of life.

But a recent pair of studies, one led by Andrew Rivkin, a planetary astronomer at the Applied Physics Laboratory, questions this long-held notion. Using infrared telescopes in Hawaii to measure the reflected light of asteroids, Rivkin’s team has discovered substantial ice and evidence of prebiotic, carbonaceous compounds on one of them. The finding, detailed in the April 29 issue of Nature, puts hypotheses on the origins of life on Earth in a new light and blurs distinctions scientists have long made between asteroids (orbiting rocky bodies that formed within the solar system) and comets (which typically come from outside our planetary system). A separate experiment run by an astronomer at the University of Central Florida (UCF) recently confirmed the Rivkin team’s results.

“This tells us that there were more ways for Earth to get water than we previously thought,” says Rivkin, who has been searching for water on asteroids since 1993. “Fifteen years ago, we thought that there were clear boundaries between different types of objects in space and where they came from. This underscores how nature doesn’t like playing within those strict lines.”

Rivkin’s research was conducted between 2002 and 2008 and centered on 24 Themis, a 123-mile-wide, carbon-rich asteroid discovered in 1853. It is one of hundreds and possibly thousands of bodies that collectively orbit the sun in an asteroid belt between Mars and Jupiter. Astronomers had thought that 24 Themis’ orbit brought it close enough to the sun that any surface ice would evaporate. But after using infrared technology to study light at extremely low wavelengths, Rivkin and his team learned that enough frozen water is present within two kilometers of the asteroid’s surface to continually replenish a coating of ice on its surface, while maintaining some reserve inside the asteroid. The UCF-led team hypothesizes that collisions with micro-meteoroids vaporize ice below the asteroid’s surface. That water vapor then re-freezes and forms the ice on the asteroid’s surface.

Scientists say the findings of Rivkin et al. support their broader theories about the role celestial bodies played in hydrating Earth. “The new results broaden our perspective,” says Dale P. Cruikshank, a planetary scientist at NASA and a follower of Rivkin’s work since the latter’s days as a student at the University of Arizona. “We know that water and complex organic chemicals exist throughout the solar system, throughout our galaxy, and even in the dust between the stars in millions of other galaxies. The new discovery of water and organics on Themis does not change our view on the origins of Earth’s life, but adds information that helps support the long-held hypothesis that the basic materials came to Earth from outside sources some 4 to 4.3 billion years ago.”

The question, Rivkin says, is how many sources. More and more asteroids are being charted. And the 2006 discovery of a band of comets within the asteroid belt expands the possibilities. “There’s a lot more to look at now than I could have told you about 15 years ago,” he says.