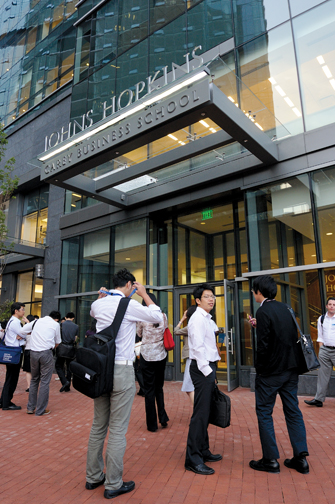 Like any successful entrepreneur, Trevor Kuchar knows fortune often boils down to timing. As an undergraduate at the University of California, Santa Cruz, the former combat medic and Gulf War veteran planned to find post-graduation riches in Silicon Valley. But during his junior year the dot-com bubble burst. He recalls, “Everyone lost their job overnight, it seemed. Unless you had a PhD, you didn’t stand a chance.” The East Asian studies major saw greener pastures in China. In 2004, after turns as an English teacher and human resources professional in Beijing, Kuchar founded Alternate Paradigm, a company that provided IT services to small and mid-size companies. The firm flourished, buoyed by Olympic fever and oodles of foreign investment. At its peak, Alternate Paradigm had eight employees and grossed roughly $300,000 per year.

Then the global recession hit. “After the [2008 Summer] Olympics there was nothing,” he said. “Everyone stopped spending.” He sold his shares to his partner, got married, and moved back to the United States just as the Carey Business School began planning its new Global MBA. The program welcomed its inaugural class this month, and Kuchar, 35, was among the first cohort of 89 students. He chose the Carey program because of its promise of a unique approach to business education with an innovative academic structure, a global perspective, and an avowed goal of producing graduates who want “to profit society as well as turn a profit.”

“I understood the risks [of entering a new program]. I also understood the rewards,” Kuchar says. He sampled another business school and was dissatisfied. “I went to some classes there and they were good, but each felt like a separate entity. You could forget what you learned in one and move on to the next.” In the Hopkins program, classes interconnect. Students will look at the same issues and case studies through different lenses, whether it’s accounting, marketing, management, human resources, or ethics. “You really understand what is going on. That really appealed to me,” Kuchar says.

The two-year, full-time program’s new curriculum is interdisciplinary in orientation and emphasis. It draws upon Johns Hopkins science and research and has tenets anchored in liberal arts, medicine, engineering, and public health. A distinctive feature is the Discovery to Market project, meant to provide insight into translating a Hopkins research discovery into a product or technology with potential for commercialization. In the first year, students attend seminars and workshops to learn about the discoveries; in the second year they try to adapt selected products and services to the marketplace.

The program also aims to educate students to think critically and act ethically, in line with the school’s motto: “Where business is taught with humanity in mind.” In the intersession after year one, students will go overseas to work on a business problem within a developing nation, learning to work in low-resource countries with inadequate infrastructures. Shahd AlShehail said it was this humanistic and international approach that attracted her. AlShehail, who earned her bachelor’s degree in accounting from the University of Evansville in 2009, recently worked as director of operations at Al Qadem Fashion House in her native Saudi Arabia, a family business she helped start in 2006. She had conducted a thorough search of the top-tier business schools but kept coming back to Carey.

William Kooser, the school’s associate dean for students, argues for the uniqueness of the Carey School’s program: “Others might offer single pieces of what we’re doing, but nobody puts everything together and requires what we’re asking of our students. Our emphasis on humanity and an integrated, team approach to teaching makes us fundamentally different.”

About a third of the charter-class students are women and half are international. They range in age from early 20s to early 40s; their professional experience ranges from zero to 15 years. They hail from the United States, Ghana, the Netherlands, Greece, Turkey, India, China, Japan, Indonesia, and elsewhere. Kuchar and AlShehail said that while they understand the risks involved with an unproven product—the new program has no elite business school brand power like Wharton or the Harvard Business School—they are relying on Johns Hopkins’ stature and the substantial investment the Carey School has made in this program. “If Johns Hopkins is willing to gamble such a large sum of money and scout the world for some of the best teachers, I know they are really trying hard to make this work,” Kuchar said. “Their reputation depends on it.”

The first cohort also likes being first. “You know that you’re part of this experiment on what will work for the future,” AlShehail says. “But we’ll always be remembered with prestige as the first class. We’ll be pioneers.”