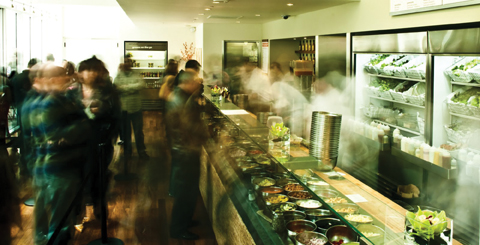 In the summer of 2006, Leslie Silverglide was riding her bike around San Francisco’s Financial District when she spotted the perfect location for the second outpost of her restaurant, Mixt Greens. She immediately called her business partners—her then fiancé, David, a businessman, and her brother, Andrew, a chef—and told them to grab the brokers and come down right away.

The men were in for a letdown. A month earlier, they had ruled out the same spot because it sat on a dingy side street that played host to some of the neighborhood’s sketchier characters. But Leslie was adamant: She could envision its potential, and convinced them to take it.

Today, the alleyway is filled with small outdoor tables, and the restaurant looks like it would fit right in on a quaint corner in Paris. And, as David is proud to note, it brings in more revenue than any of Mixt Greens’ seven other locations in San Francisco, Los Angeles, and Washington, D.C.

“In the past couple of years, a lot of restaurants have jumped on the green bandwagon,” by using organic ingredients, Leslie says. Mixt Greens, however, has made all aspects of its business sustainable, recycling or composting more than 90 percent of its daily waste. Every fork, napkin, and to-go box is made of compostable corn. The kitchens are scrubbed with nontoxic cleaning products; uniforms go to eco-friendly dry cleaners. “Customers know that we’re the real deal,” she adds.

David and Leslie met at a party more than a decade ago, when David was a senior at Johns Hopkins University and Leslie a freshman. When she graduated, they traveled together before heading to Oxford, where she studied biodiversity, conservation, and management and he got his MBA. When they returned stateside, they began talking business with Leslie’s brother, Andrew Swallow, who had worked at several major restaurants and was ready to branch out on his own. They opened their first Mixt Greens in San Francisco in April 2006.

Since then, David says he has eaten at Mixt Greens just about every day. Amazingly, he’s never made his own salad. “It’s too overwhelming,” he says with a chuckle. Leslie usually starts with one of her brother’s salad creations and then doctors it, swapping the lettuce variety or dressing.

Mixt Greens has a new D.C. restaurant opening soon. Although the team recently sold the concept to an international private equity group, David remains involved as a board member and envisions 50 branches in the next five years or so, in every major U.S. market.