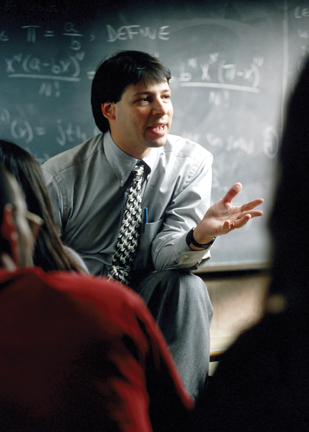 At a sold-out show one Saturday morning in June, Arthur Benjamin—aka the Mathemagician—added a surprise guest to the end of his act. Ten-year-old Ethan Brown, wearing a tie for the occasion, timidly took the stage from his seat in the front row.

Three months earlier, Ethan had picked up Benjamin’s book, Secrets of Mental Math, and every day after practiced progressively more difficult number tricks. Now, in front of a packed auditorium at a New York City science festival, he was ready to show off his skills.

Standing stage left next to an easel, Benjamin asked Ethan to calculate the square of 987. The young protégé rattled off the answer—974,169—even before Benjamin could scribble it down. “I see this, and I just get all choked up,” Benjamin said to the crowd.

Benjamin’s act includes no poofs, pyrotechnics, disappearing assistants, or magic wands—all he needs is his brain. He can calculate the square of a five-digit number—a product too large for most pocket calculators to handle—in about 15 seconds. If you tell him your date of birth, he can tell you what day of the week it was. Best of all, at the end, he’ll show you how he does it.

He puts on this riveting math show for about 50 groups a year, ranging from business and creative leaders attending prestigious TED conferences to children living in rural Africa. (Offstage, he’s a professor of mathematics at Harvey Mudd College, in California, where his research looks for patterns within the famous Fibonacci sequence. He is also a husband and father of two.)

Benjamin was in the eighth grade when he first started doing standard “rabbit in the hat” magic shows at birthday parties. By high school, “The Great Benjamini” was performing all over Cleveland. His father suggested he add his other passion—math tricks—to the act. “I was skeptical, but it turned out to get the best reaction of the show,” Benjamin recalls.

As his popularity grew, Benjamin faced a tough decision: Would he be a true magician—keeping all the sneaks to himself—or reveal his techniques to the audience? “I decided that the explanations of how all this works were as interesting as the demonstration itself,” he says. “It’s all about sharing the mathematics and getting people excited about it.”

Not surprisingly, Benjamin has much to say about improving basic math education in the United States, including his recommendation that elementary school teachers specialize in math and that students do more mental math, rather than paper-and-pencil exercises. He also argues that statistics replace calculus at the top of the math educational pyramid. “Learning about randomness, risk and reward, statistical significance—it teaches critical thinking skills and has much more applicability in daily life than does calculus,” he says.

He may be a tad biased, given that operations research and discrete mathematics were the topics of his doctoral work at Johns Hopkins University. In his 1989 dissertation, he calculated how to maneuver a set of marbles across a Chinese Checkers board to devise general rules for efficient traveling.

On October 7, Benjamin will return to the Homewood campus for a show. (Earlier in the day he will deliver an academic lecture in honor of his former professor, Alan J. Goldman.) If you catch the show, don’t bother asking him how he does the card tricks. “I’d get kicked out of the Magician’s Union,” he says.