The Power of Percussion
September 3, 2010 |  by Cassandra Willyard 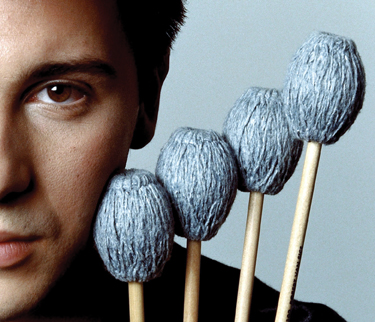 Svet Stoyanov, behind the beat.

When Svet Stoyanov finished high school in Bulgaria, he resolved to study percussion in the United States. It was a risky idea because if he couldn’t find a conservatory willing to take him, he would be required to serve in the Bulgarian military. Still, he only applied to one school: the Peabody Institute. “I really wanted to study with an amazing teacher in an amazing place,” Stoyanov says.

Stoyanov was not only accepted into the Peabody Conservatory, he studied with top percussionist and marimba virtuoso Robert van Sice and earned a bachelor’s degree and a performance diploma. He won the 2003 Concert Artists Guild International Competition, which landed him a solo debut at Carnegie Hall. And last year, he released his first solo album, Percussive Counterpoint, and accepted a teaching position at the University of Miami’s Frost School of Music. This year, he will have one more accolade to add to his CV: the Johns Hopkins University Alumni Association’s Outstanding Recent Graduate Award. “I feel that I should be giving an award to Johns Hopkins for what they have done for me,” he says humbly.

Not yet 30, Stoyanov has already become an influential percussionist, performing as a soloist with the Chicago, Seattle, and American symphony orchestras and premiering Phillip Glass’ Concerto Fantasy for Two Timpanists and Orchestra at Lincoln Center’s Avery Fisher Hall. One of only a handful of solo percussion performers, he is as comfortable tapping out Bach on the marimba as he is beating traditional rhythms on the tapan, a Bulgarian drum with a wooden frame and two heads. Percussive Counterpoint, which came out on the CAG Records label, features some of Stoyanov’s favorite percussion music, including traditional works and less conventional fare, such as a video of Stoyanov performing “Musique de Table,” a theatrical percussion piece. The CD also includes Stoyanov’s transcription of “Electric Counterpoint,” a piece written by Steve Reich for electric guitars that Stoyanov plays on marimba and vibraphone.

Stoyanov now divides his time between performing and teaching. As a percussion professor and director of percussion studies at Frost, he leads all the percussion ensembles—there were seven last year—and works with about 10 students one on one. Since Stoyanov took over, the studio has grown dramatically. “Almost everybody we accepted came this year,” he says. Even non-percussionists have asked to join Stoyanov’s ensembles.

Stoyanov hopes to do more recording in the near future. In fact, he has an ambitious plan to record everything that has been written for him in the past few years. “I don’t think one CD is enough,” he says. “I think I’ll need two or three.”