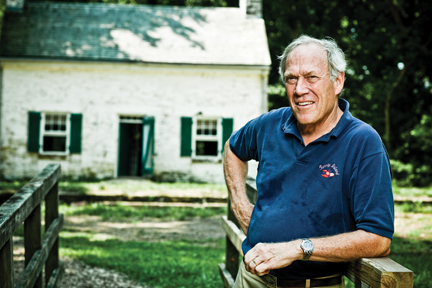 C&O Canal Lockhouse 22, built in the 19th century and restored in the 21st, is now open for overnight guests, thanks to the work of volunteer Robert Mertz. Photo: Stephen Voss

Running alongside the Potomac River, the Chesapeake and Ohio Canal wends its way from Washington, D.C., to the Appalachian Mountains in Western Maryland. In the late 1800s, this 184-mile manmade waterway served as a conduit for freight boats carrying heavy loads of coal, lumber, and grain. Today it’s the centerpiece of a 19,000-acre national park.

Built over uneven terrain, the C&O Canal used 74 locks to lift or lower boats between its different levels. Each lock required a locktender to be on hand around the clock to operate the locks for passing ships. These men lived nearby in company homes, known as lockhouses. After severe flooding damaged the canal in 1924, officials shut down the waterway, and the lockhouses were abandoned. When the National Park Service took over in 1971, the deteriorating buildings stayed empty—that is, until several years ago when the park’s superintendent had an innovative idea: Why not restore the 26 standing lockhouses and rent them out? The public could learn about the history of the canal by bunking in a restored lockhouse, and the National Park Service could bring in money to help with the buildings’ upkeep.

Enter Robert Mertz, a Bethesda, Maryland, resident and longtime fan of the canal. “My wife and I have enjoyed using the C&O Canal for biking, canoeing, birding, running, hiking, and fishing for the last 40 years,” he says. Now a member of the board of the C&O Canal Trust, a nonprofit dedicated to restoring and promoting the park, Mertz became involved in the Canal Quarters project a couple of years ago when he decided to volunteer with the organization.

Mertz, a retired financial analyst for the World Bank, first assessed the economic feasibility of the project by looking at tourism along other canal trails, particularly the Erie Canal in New York. When the actual restoration began, Mertz turned to his cousin, retired foreign service officer Tain P. Tompkins, SAIS Bol ’68 (Dipl), SAIS ’68, A&S ’70 (MA), to do some of the plastering and painting. Now he is focused on the interiors. “My job is to figure out period-appropriate furnishings,” says Mertz, who enlists the help of local historians and specialists to research, locate, and purchase everything from furniture to bedding, glasses, dishes, cutlery, and curtains from three distinct time periods. Outfitting the houses with beds presented several challenges. For example, due to space constraints, Mertz had to hunt for trundle beds, designed to pull out from under the traditional rope beds. Nineteenth-century trundle beds, however, are scarce and expensive. So he collaborated with historians from Mount Vernon and local cabinetmakers to build reproductions.

Lockhouse 22, near Potomac, Maryland, was renovated to represent a locktender’s life in the 1830s and is the most basic—no heat, no running water, no electricity. “Only those who like a more rustic and adventurous experience stay there,” Mertz says. Further to the north, near Clear Spring, Maryland, Lockhouse 49 re-creates the 1920s, the canal’s heyday. Lockhouse 6, near Washington, D.C., has all the modern conveniences available in the 1950s and tells the story of Supreme Court Justice William Douglas’ fight to protect the canal as a sanctuary for public recreation. Each house sleeps up to eight people and rents for $70 to $100 a night, and the trust hopes to open more lockhouses soon.

Unlike visitors at a museum, guests who stay at the lockhouses can interact with their surroundings. “Rather than just walking by cordoned-off rooms, you can actually sit in Naugahyde chairs or sleep on rope beds,” Mertz says. “It’s a totally unique experience that you simply can’t have elsewhere.”