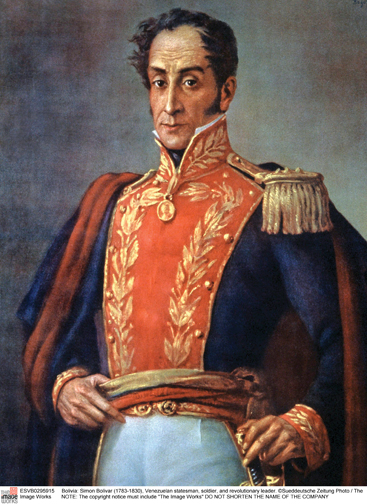 Paul Auwaerter does not, as a rule, invest a lot of time in considering what might have killed a South American liberator 180 years ago. As clinical director of the Division of Infectious Diseases at the School of Medicine, Auwaerter is a busy man. But this was a compelling case. The liberator was the liberator, El Libertador, Simón Bolívar, who waged war against Spain early in the 19th century and secured independence for Bolivia, Colombia, Ecuador, Panama, Peru, and Venezuela. Bolívar died in 1830 at age 47, the cause of death recorded by his physician as tuberculosis. But when Auwaerter read the physician’s autopsy report, there were too many inconsistencies.

He had agreed to dig into all of this for the 17th annual Historical Clinicopathological Conference. The conference, staged in April by the Medical Alumni Association of the University of Maryland School of Medicine, takes the standard clinicopathological conference, a teaching exercise in which the history of a patient’s illness is presented to an experienced clinician for analysis, and applies it to the case of some historical personage. Prior HCPCs, as they are known in shorthand, have examined the medical histories and proposed deathbed diagnoses for Edgar Allan Poe (not long-term drug or alcohol abuse but, improbably, rabies), Abraham Lincoln (might a modern trauma center have been able to save his life?), and George A. Custer (cause of death: ill-advised attack on a superior force of Lakota and Cheyenne Indians; underlying condition: histrionic personality disorder). When conference director Philip Mackowiak approached Auwaerter to present the case of Bolívar last April, the Hopkins physician was intrigued.

For his analysis, Auwaerter was provided with key documents translated and synthesized by John Dove, his conference co-presenter, a retired spinal surgeon in Britain who has researched Bolívar’s medical history, including the autopsy report written by his personal physician, Alejandro Próspero Reverand. It was Reverand who declared the cause of death as “a pulmonary catarrh that degenerated into a tuberculosis phthisis.” Various factors supported Reverand’s conclusion. Records indicate an increase in tuberculosis in South America in the early 19th century. Bolívar’s parents were believed to have died from the disease, which at the time was thought to be hereditary; it’s not, but if his parents had been tubercular, that might have resulted in transmission to El Libertador at a young age. The most convincing evidence was Reverand’s description of tubercles in Bolívar’s lungs. “It does make some sense,” Auwaerter says of the diagnosis. But there was no record of hemoptysis: coughing up blood. Plus Reverand noted that when he opened Bolívar’s chest, he found the heart bathed in green fluid; he had also stated Bolívar had been producing green expectorant. To Auwaerter, that did not sound like tuberculosis. Nor did the lack of any mention of other tuberculosis infections among the people close to him. Auwaerter says, “His woman friend, his aides-de-camp, his physician, no one else seemed to develop a pulmonary illness, which would be unusual if someone had tuberculosis.” He made a list of afflictions that might account for all of the items in Reverand’s autopsy: bronchiectasis, chronic meningitis, pericarditis, vertebral and epidural infection, diabetes, inflammatory bowel disease, hemochromatosis, leishmaniasis, syphilis. Arsenic poisoning.

The last occurred to Auwaerter because Reverand had recorded that during his 30s Bolívar had endured repeated bouts of fever leading to shivering and loss of consciousness, and that his skin had mysteriously darkened. “We know that chronic arsenic administration can cause skin changes, certainly constitutional complaints like malaise and headaches, and interestingly can cause bronchiectasis.” The last is a wasting illness—Bolívar weighed but 50 pounds at death. Auwaerter’s final diagnosis, delivered to the conference, was chronic arsenicosis. “That was the best fit I could come up with to link everything together.”

Exclude the skin discoloration, Auwaerter says, and there’s a second possibility: that Bolívar had been infected by Paracoccidioides brasiliensis, a fungal infection endemic to South America that can reside in the lungs for many years before causing problems throughout the body. Paracoccidioides is not contagious, which would explain why Bolívar’s closest associates did not fall ill. But it was the theory of arsenic poisoning that got wide play in the press and on the Internet. Had someone assassinated El Libertador by poison? Auwaerter could not rule it out, but he says, “Arsenic was then a health tonic, as it were. High-level people [like Bolívar] would have wanted the best medicine of the day, and that was thought to be these arsenic compounds.” There is written record of Bolívar taking an arsenic remedy. What’s more, arsenic was likely present in some of the groundwater in Peru, Bolivia, and Chile, countries in which Bolívar conducted military campaigns.

One person seems disinclined to accept Auwaerter’s suggestion of inadvertent poisoning: Hugo Chavez, president of Venezuela, who in 1999 renamed his country “the Bolivarian Republic of Venezuela.” In a recent televised speech, Chavez told Venezuelans, “They killed him. Here in my heart for years I’ve had the conviction that Bolívar didn’t die of tuberculosis. I don’t know if we’ll be able to prove it, but I think they assassinated Bolívar.” He has taken up the HCPC findings as support for his theory, something Auwaerter says misconstrues them. Nevertheless, on July 16, at Chavez’s direction, Bolívar’s tomb was opened so Venezuelan forensic experts can conduct tests to confirm, or not, that El Libertador died from arsenic poisoning.