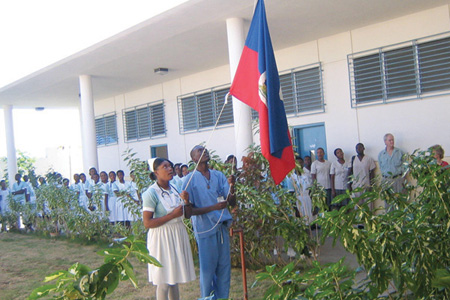 When nursing professor Ruth Barnard retired in 2000 after teaching for 25 years at the University of Michigan, she planned to spend a lot of time watering and weeding the colorful Knockout roses in her delightful front-yard garden. But then she got a phone call from the pastor at her local church.

After pointing out that poverty-stricken Haiti, the poorest nation in the Western Hemisphere, was in dire need of trained nurses, the pastor asked Barnard if she wanted to volunteer for a vitally important public health project. Would she be willing to travel to Haiti in order to help launch a desperately needed school of nursing?

“Creating a school of nursing is a very complicated business—especially when you’re doing it in a foreign country—and I soon became totally consumed by it,” says Barnard, while describing the 11 trips she’s taken to the Maryland-sized Caribbean country since agreeing to the pastor’s surprising proposal 10 years ago. “When I first started working on the project, I knew almost nothing about Haiti. But that changed in a hurry, and I began helping to plan and organize the school from the ground up.”

Barnard and several other Michigan volunteers went through “a long, hard struggle” to raise funds from her local church and other resources, and to help organize the Haitian administrative entity that would manage the new facility. The effort paid off in 2005, when the new school opened its doors with 36 Haitian nursing students in the economically stressed city of Léogâne, located about 20 miles west of Port-au-Prince. Then, last January, when the massive earthquake devastated the area and took the lives of an estimated 150,000 people, the fledgling nursing academy suffered its own losses. Three of its students, who were living in private residences, were killed in the quake. “It was a terrible tragedy,” says Barnard, who was not in Haiti during the earthquake. The school suffered damage to its compound wall and water towers, but the buildings at least were spared. (The campus is now home to nearly 1,000 townspeople who live in tents with nowhere to go.) Classes resumed in May 2010, and the school is once again producing trained graduates who can now help in the recovery effort. “So far, the school has graduated more than four dozen nurses, and the enrollment is about 100,” Barnard says.

Known as FSIL, or the Faculté des Sciences Infirmières de l’Université Episcopale d’Haiti, the school is attached to the Episcopal University of Haiti and offers a four-year curriculum of nursing studies modeled on leading baccalaureate nursing programs in the United States. To help raise funds and assist in the operation of the school, Barnard and several other FSIL volunteers established the nonprofit Haiti Nursing Foundation, which has provided startup money and continues to help meet daily expenses, with additional help from other funding sources.

Describing the urgent need for nursing education in Haiti, Barnard, who holds a nursing PhD from New York University, notes that there are currently 10.7 nurses per 100,000 people in Haiti, compared to 940 in the United States.

“Even before the tragic earthquake, Haiti faced enormous public health challenges, and the lack of trained nurses was certainly one of them,” she says. “The battle to help rebuild Haiti after the earthquake has only begun, but we’re hoping that we’ve made a very real start by helping to train nurses.”