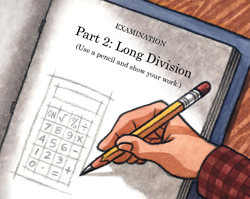 Reviewing his son’s grade-school homework in the early 2000s diverted W. Stephen Wilson from his research in algebraic topology to question basic math education. At two well-regarded private schools, Wilson’s son had encountered the most widely used elementary math curricula, Investigations and Everyday Mathematics. Both encourage the use of calculators for multiplication and division, in line with a 1989 report from the National Council of Teachers of Mathematics that downplayed teaching arithmetic with pencil and paper. “What the schools were doing with math was beyond my imagination,” Wilson says. “I knew that my kid’s third-grade math wasn’t going to prepare him for college.”

A professor of mathematics in the Krieger School, Wilson teaches calculus to undergraduates. In 2006, he decided to conduct an experiment with his Johns Hopkins students. His Calculus I for the Biological and Social Sciences class that year bore close resemblance to the 1989 class. Their scores on the SAT math exam were nearly identical, and the two groups contained the same percentage of freshmen. Curious to see how they’d compare on the same exam, he gave the 2006 students the same 77-point final that he’d given the 1989 class. The results, he believes, confirmed his hunch that students were coming out of K–12 schooling less prepared for college math. When he compared scores by the grading scale in use in 1989, 27 percent of the 1989 students received As on the exam and 37 percent scored Bs. Only 6 percent of his 2006 students would have received As, 26 percent Bs. Johns Hopkins had changed its grading by 2006, and when Wilson scored the tests using the newer scale, the students compared the same: 52 percent of the 1989 kids scored As, compared to only 31 percent of the 2006 students.

As another experiment, Wilson gave a short test of basic math skills at the start of his Calculus III class in 2007. The results predicted how students later fared on the final exam. Those who could use pencil and paper to do basic multiplication and long division at the beginning of the semester scored better on the final Calc III material. His most startling finding was that 33 out of 236 advanced students didn’t even know how to begin a long division problem.

Wilson says he wouldn’t be so against calculator use if teachers still taught multiplication and division by hand as well, regardless of the fact that few will ever do math that way as adults. “The theory that people should only learn what they are going to use as adults doesn’t make a lot of sense,” he explains. “If you take that to the extreme, there wouldn’t be much left to K–12 education.  If someone is going to fly an airplane when they grow up, should we skip all the intermediate steps and just teach them how to fly an airplane when they are 10?”

His studies of Johns Hopkins students are “all sort of having fun, not serious education research,” he says. But his advocacy of math education reform has led to appointments to local and national advisory panels and conferences. In 2006 he served as senior adviser for mathematics in the U.S. Department of Education, where he helped form the National Mathematics Advisory Panel. Since his return to his Hopkins classes in 2007, Wilson has continued to review K–12 curricula for various states.

Wilson has found that the brightest students work around what he calls their “unnecessary handicap.” In his study of 2007 Calculus III students, for example, the correlation between being “division clueless” and scoring poorly on the final exam wasn’t as strong as he would have guessed; some of those students did just fine. But that seemed true only for the minority. When he followed up on the class two years later in 2009, one-third of the “division-clueless” students were on academic probation.

Wilson doesn’t like the long-term implications of a new generation of engineers and scientists who can’t divide or don’t know their multiplication tables. He compares it

to having car mechanics who only know how to fix automatic transmissions. “You might use a calculator if you’re an engineer, but you need to know what it does. If you need

mathematics in your career, then it is probably