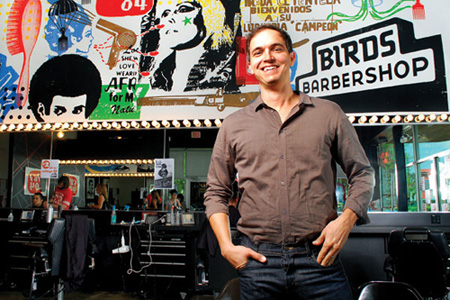 Michael Portman arrived in Austin from Los Angeles a few years ago, in desperate need of a haircut. He asked his longtime buddy Jayson Rapaport where to find a good hair salon, casually mentioning how much he liked the ones he’d known in L.A. —unisex places that were stylishly low-key, friendly, and unfrilly, with good music and reasonable prices.

None like that here, Rapaport said, not even close. Just the usual old-school barbershops, boring chain haircutteries, and fussy salons. Rapaport, then the owner of two Quiznos sandwich shops and looking for a new venture, half-joked that they might have hit upon a business idea. Portman—seeking a new creative project himself—took the comment seriously: Maybe they could offer the city that touts its weirdness an alternative that would be “cool without pretension.” And, even better, maybe they could make a little money and have a lot of fun doing it.

In 2006, with the help of a small-business loan, Portman and Rapaport opened the first Birds Barbershop on Austin’s South Lamar Boulevard. (There are now four.) Rapaport is the financial guy, and Portman’s imagination is behind its retro look, which became a template for the subsequent Birds: vintage rock ’n’ roll decor, lots of black and chrome, Technicolor art, 1980s-era video games, and an eclectic music mix—bossa nova, country, hip-hop—he compiles himself. Prices are mid-range, there are no appointments, and each client—about 70 percent are men—is offered a free beer upon arrival. The pair has just created a line of unisex hair products called “Verb” that, they insist, are as good as the $20 stuff but, like their haircuts, are priced a bit lower.

Portman, who grew up in Laredo, Texas, always had a creative streak—it’s just taken him a few decades to find the best way to express it. He thought of attending art school, he says, and then the Johns Hopkins Writing Seminars “kindled my love of writing, of creating worlds.” After graduation, he spent the next several years in various jobs, including four years working at a Dallas ad agency, writing screenplays on the side. Then it was on to Los Angeles, where at one point he took a job at a public relations firm and met his wife, Erin, and later wrote speeches for the president of Disneyland. By 2005, Portman had grown tired of long L.A.–style commutes and corporate writing jobs, and the couple, who now have two young sons, headed to the way-more-mellow Austin.

Once the business was born and beginning to boom, Portman says he relished being “my own boss and my own editor” while working on what he calls “a big art project.” With Birds, he adds, he’s finally found a satisfying creative outlet:  “You can see it, touch it, hear it—it’s 3D. Life is good.”