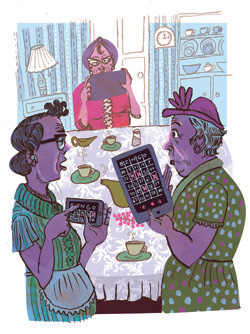 My parents’ generation was mostly technophobic, with the partial exception of my dad, a tinkerer who liked gadgets, although primarily because they existed rather than for what they did. When the Japanese made high-quality, sophisticated cameras affordable, even he headed for a point-and-shoot, the simpler the better. An aunt never mastered remote controls at a time when all 12-year-olds could hook up a VCR in no time flat—and did so for their elders. The technology generation gap was striking.

You would expect it to have grown with the proliferation of personal computers, smartphones, and elaborate home entertainment centers. Maybe not.

Frequent and costly fieldwork at a national electronics chain store revealed many of the young and tattooed among the customers, but also a sizable representation of the balding, graying, and sagging—my people. They were even asking sensible questions about such things as wireless networks and HDMI cables. They were talking the talk. Equally inspiring, my fellow codgers weren’t intimidated by the knowledgeable young sales staff, some of whom were probably cutting middle school classes. Perhaps, unlike their parents, this aging cadre of techno-junkies will not go gentle into that good night without BlackBerrys and Wi-Fi. They will not rage against the dying of the light, as Dylan Thomas would have it, but against dropped signals.

That came home to me—literally—during a lovely visit by friends of long standing, one of whom retired recently. The key event was an outdoors fall afternoon conversation. Once we meandered through the usual topics—kids, mutual friends, politics, and food—there was a technology show-and-tell session, with an iPad winning the prize for coolness and the reward that comes with it: envy. (Christmas is coming.) The next event was a smartphone smackdown. We started with the negative. The consensus was that our instruments of choice weren’t much good as telephones. However gorgeous they might look in the hand, the effect of using one to make or receive a call was like taking a cigarette case you see in old movies and slamming it against your ear.

We nonetheless agreed that among the ways in which our smartphones excelled was in making humans look stupid. I had mine a week, and used it to make two restaurant reservations via the Internet, before figuring out how to answer an incoming call from anyone retrograde enough to make one. Another way in which smartphones excelled was in turning pricey little chunks of technology into things God never intended telephones to be. Mine got points for serving as a compass (proving conclusively that our north/south street doesn’t run north and south) and displaying a star map. The latter definitively identified a large glowing object in the sky as the moon. Because my wife was sitting next to me, I couldn’t demonstrate another nifty feature that allows us to know where the other is. Unfortunately, it isn’t terribly accurate and when she is presumably at work it shows her in a nearby graveyard. This feature could cause domestic problems. My favorite app in the mostly useless competition was one that turns the phone into a level. Even as a kid growing up with cheap sci-fi serial movies, it never occurred to me that Buck Rogers might use a telephone to hang pictures straight, whatever straight might be in outer space.

There we were as that beautiful day ended, aging kids in an electronic candy store.

If my fieldwork is representative, we are not alone. It’s a long way from my remote control–impaired aunt, as I realized overhearing a woman in her golden years respond to a sales pitch for a smartphone with an enthusiastic “Oh my God!” Her granddaughter couldn’t have said it better and wouldn’t have put it differently.