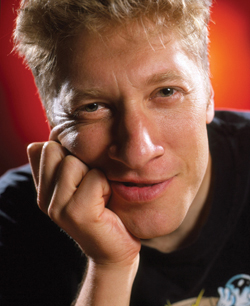 If you don’t mind, I’m going to lie down—my ass hurts,” Matthew Klam tells a just-arrived stranger before stretching out on the couch in his office. Although the scenario—one guy flat on his back on a couch, the other in a chair with his legs crossed and a notebook in his lap—looks like something out of The Three Faces of Eve or Analyze This, Klam isn’t giving up any secrets.

Recently named an assistant professor by the Krieger School’s Writing Seminars, the cult-renowned short-story author is about as likely to go on about the way he works, and why, as he is to turn on an overhead light in his little cavern of an office. “I don’t want to talk about my process because I don’t want to hear myself having that conversation,” he explains, eyes darting under a blond shock of Eraserhead hair. “I don’t want to hear it in my head when I’m trying to work tomorrow. I hate talking about the process because even when it goes well, it’s shockingly difficult.” So, um, what is he writing these days? “It’s a piece of fiction,” he says, refusing to peg the opus further. “I wouldn’t tell you what it was, even if I knew.” A rainbow of colored lights—the room’s only illumination—eerily snakes along the walls. “I don’t have a window,” he says, mocking a pout. “I’m thinking I was incarcerated in a past life.”

Named by The New Yorker in 1999 as one of the top 20 fiction writers under the age of 40, Klam followed up a year later with Sam the Cat and Other Stories (Random House), a compendium of stories that had appeared sporadically in the magazine. The book marked Klam’s arrival as a voice of the hungry young male, a species noted for its sexual energy, risky behavior, and an utter (and often desperate) need for love. He writes about men for whom John Updike’s truism—“Sex is what keeps us walking toward the cliff”—might well serve as a motto. That some of them end up tumbling over it and into the abyss—by following through on an embarrassing homoerotic urge, or making an angry if truthful speech at a bigwig friend’s wedding, or wooing another woman as his wife goes into labor—seems to come along with the Y chromosome.

Now 46, but still looking a bit like one of his youthful characters, Klam is no longer an emerging star. He writes stories and nonfiction regularly for magazines like The New Yorker and GQ, sometimes revising as many as 30 drafts before cashing a check. He sighs when the laurels of his past are brought up. “I wouldn’t wish that on anybody,” he says. “It’s much easier to manage modest expectations.” When Google alerted him to the fact that he was mentioned in online discussions about The New Yorker’s newest list of literary wunderkinds, published last summer, he was distressed that people “were pitying me” because he hadn’t become a literary brand name like fellow 1999 honorees Junot Diaz, Jhumpa Lahiri, and David Foster Wallace. “I had to turn all the alerts off,” he says.

Nevertheless, critics and others have heralded, then and since, the honesty and vividness of Klam’s stories. “There’s wonderful energy to his prose,” says Alice McDermott, professor and writer-in-residence in the Writing Sems. McDermott and Klam serve on the committee of the prestigious PEN/Faulkner Foundation Award for Fiction. She called Klam to let him know of the open teaching spot in the department. “His stories seem to tumble out, determined to be told,” she says.

Klam’s embodiment of that energy, along with his devotion to the short story, is attractive to his students, she adds: “Unlike the rest of us [in the Writing Seminars], Matt has thus far dedicated his efforts in fiction to the short story alone. It’s clearly a form he has mastered. Since most of our fiction students begin with the short story, Matt is in many ways the ideal first reader of their work.”

As he veers between off-the-cuff eccentric and evasive, Klam does spill a few facts about his methods. He lives the credo of Michel de Montaigne—who wrote: “My mind will not budge unless my legs move it”—by standing at a computer each day, sometimes for hours, spending the “two weeks to one year” it takes to crank out a story that reads like it just crept up on you and started talking. He remains upright, he says, “because it’s just my belief that people who spend a lot of time sitting won’t last that long.” A friend of his, a surgeon, recommended gum-soled clogs as a comfort measure for those condemned (or who condemn themselves) to a day filled with verticality. Klam enthuses about them like a boy does about the bells and whistles on his new bike.

When he’s not on alert and writing at his work station, Klam teaches several courses each semester. He recently co-founded a Washington, D.C., chapter of 826 Valencia, the chain of charities established by author, publisher, and literary impresario Dave Eggers. The organization encourages school-age kids to put pen to paper. And he’s still got plenty of energy left over to protect his space. “See this?” he says, pointing to a garish set of warped and oversized dentures that look like something off the set of a Tim Burton film. He takes a huge, matching toothbrush out and puts it to work. “When I want my students to leave, I tell them it’s time to brush my teeth.”

Taking the hint, the stranger wishes him luck and slips out the door, slowly closing it behind him.