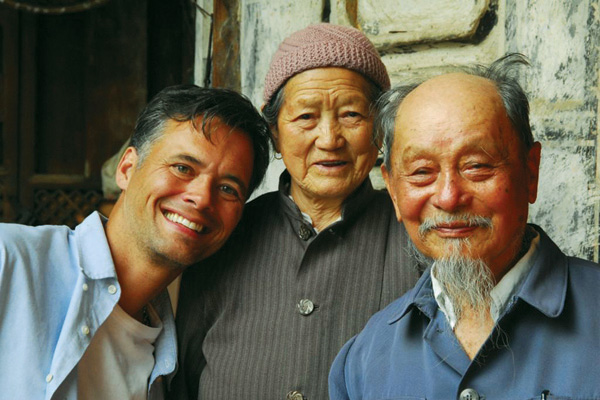 Brian Linden embraces the traditions of villagers in the Yunnan Province of China.

Brian Linden lives in a small Chinese village called Xizhou, on the old trading route to Tibet. Fluent in Mandarin, he knows the local horse-cart drivers and basket weavers, and can recall the most arcane minutiae of the area’s history and architecture. He’s fascinated by the people here, and the villagers are in turn enchanted that this 6-foot-plus guy from Chicago has so fully embraced their lifestyle and language. “Every time I speak [Mandarin],” Linden says, “they’re blown away.”

He and his wife, Jeanee, a Chinese-American from San Francisco, have spent the past several years creating the Linden Centre, a retreat for visitors seeking China at its most authentic—along with some of the comforts they might find in an American boutique hotel. They wrestled with red tape, charmed Chinese officials in the country’s southwestern Yunnan Province, and “risked their life savings,” Linden says, to acquire an architecturally significant stone complex and painstakingly transform it into something beyond a hotel. Linden coins it “a non-urban-based intellectual retreat.”

Since the fall of 2008, they’ve welcomed mostly Western guests for weeklong cultural immersions that don’t look much like ordinary tourism. “Everyone becomes part of the community,” according to Linden. He took a recent group to meet the village elder; on another day they observed a ceremony honoring the dead, and briefly paid their respects to the family in mourning. And back at the center? Espresso and wireless service. It has recently been selected for a 2010 Global Vision Award by Travel  + Leisure magazine.

Yet, Linden admits, he “knew nothing about China” until his early 20s. After studying political science at Northeastern Illinois University, he graduated at 21 with an itch to travel. Somewhat on a whim, he signed on to study in Beijing, arriving that summer via the Trans-Siberian Express. He says, “I remember coming in on the train over Mongolia and really seriously [feeling] probably more at home than anyplace I had been outside of the States.”

After more schooling in the United States, in 1987 Linden entered Johns Hopkins’ fledgling program in Nanjing, where he and the other Americans were each paired with Chinese roommates studying Western culture. It was a revolutionary idea in repressive 1980s China, where Linden was detained (quite politely, he insists) 13 times for traveling in areas off-limits to foreigners. But he loved it all. The program, he says, “made me realize that China was going to be my life.”

The Lindens, who have two sons, Bryce, 11, and Shayne, 14, have kept an American foothold for the past 15 years with the Linden Gallery of Asian Art in Ellison Bay, Wisconsin. As the Linden Centre grows busier, Jeanee has been dividing her time between Wisconsin and China in order to maintain the gallery. But Linden’s focus is firmly in Xizhou (“Happy Town” in Chinese), where he has a platform to share his favorite subject with the uninitiated. Every day he jogs through the rice fields, he says, and thinks, “What a joy in life to think that you can continue to do what you have a passion for. This is my dream.”