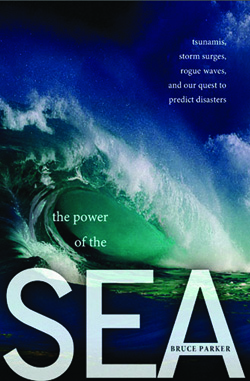 As late as 2004, much of the world was ignorant of tsunamis, in any language. But when nearly 3 million died in an Indian Ocean tsunami that year, a tidal wave of world attention gave the Japanese term traction. The ocean-ographer author starts with a seaside concept we ought to have mastered—tides—recounting the triumphs of military leaders who divined the attractive powers of the crescent moon to swamp their less seaworthy opponents at flood tide. Then on to wave motion and its abhorrent killer rogue, currents, and the aberrant El Niño. But it is the tsunami and its seismic aspect, the clash of tectonic plates in the ’04 disaster, that dominates the book’s conclusion on what has been done, and must be, to warn of future devastations.

The author offers all that is needed to practice in-house gardening, fueled for the most part by a sun aligned above the roofing glass. In her enthusiasm, she also implants more mildly relevant history than one might expect—of making wrought and then cast iron as well as the plate glass, for instance, to explain the blossoming 200 years ago of crystal palaces for tropical flora demanded by wealthy Europeans. After explaining the economics of plant marketing, she closes strong with how to put a living wall in the conservatory. Having disclosed familial and medical issues along the way, her writing flowers into more a memoir than a how-to.