Tanzania turns to the Muppets to help its kids
December 8, 2010 |  by Lisa Watts 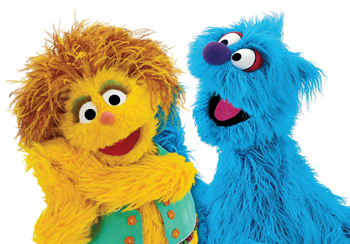 When officials in Tanzania needed help to improve child literacy and public health, they turned to an array of scraggly characters with names like Teacher Gumbo, Zobi, Moshe, and Kami. All are Muppets—popular Sesame Workshop characters that have proved effective in teaching kids to read, count, and live healthier lives, according to new research out of the Bloomberg School of Public Health.

Sesame Workshop produces programming in more than 120 countries. For Tanzania it helped produce Kilimani Sesame, a multimedia project meant to entertain and educate preschoolers. Dina L. G. Borzekowski, an associate professor in the Bloomberg School, helped plan the content, then studied the effects on literacy, numeracy, emotional and social development, and health and hygiene after 223 children were exposed to six weeks of Kilimani Sesame. “We got some really lovely results,” she says. The more exposure the preschoolers got to the special television episodes, storybooks, radio shows, and live action films, the more likely they were to say that it’s OK to invite an HIV-positive person to their homes, for example, and to know that they should sleep under mosquito nets to prevent malaria.

Fighting the stigma of HIV infection emerged as a top public health priority when Borzekowski traveled to Tanzania in 2007 to interview local educators and health officials. Consequently, the Muppet Kami, an orphan girl, is HIV positive. Borzekowski devised a new measure for receptivity during the project. The best gauge of how well the children received the messages was not just measuring their exposure, she found, but counting how many Muppet characters they could name.

She recently evaluated a similar project in Indonesia. Traditional Indonesian puppets mixed with Sesame Street’s Muppets to focus on safety, cultural traditions, and environmental issues. Jalan Sesama has taught Indonesian children important lessons about things like seatbelt and helmet use, Borzekowski found. Those findings will appear in an upcoming issue of International Journal of Behavioral Development. Her Tanzania study was published in the June 25 issue of Journal of Applied Developmental Psychology.

For all its sweet characters and catchy jingles, Sesame Street has always relied on research to inform its content. Gerald Lesser, a Harvard psychologist and professor of education, helped create the program. He believed that it could offer educational programming, especially for preschoolers from disadvantaged backgrounds, while also entertaining them. Lesser served as Borzekowski’s doctoral adviser, shaping her research focus.

“Content matters,” she says. “If you design culturally appropriate content, your message gets across. Kids are going to learn from media, so why not put it to good use?”