At a judging of Emmy award nominees last August, Annelise Pruitt, A&S ’04, and her collaborator were the youngest people in the room. “Nobody knew who we were,” recalls Pruitt, designer of the website Star Wars Uncut (starwarsuncut.com). Their site had been nominated for an Emmy, but its chances were slim. It was just a hobby project, and they were competing against television networks, explains Pruitt, 28.

The nominees in technical categories had been invited to evaluate each other’s work, based on their five-minute entry videos. When Pruitt’s video was screened, “people began laughing and clapping,” she recalls. “We were sitting in front, and the people behind us said, ‘I don’t know how they did that, but I’m going to vote for those people.’”

Star Wars Uncut went on to win an Emmy for outstanding achievement in interactive media, beating sites for Fox’s Glee and Showtime’s Dexter. And, with the site’s design complete, Pruitt went on to the next challenge in a career marked by intense variety—and more than its share of come-from-behind victories.

Pruitt arrived at Johns Hopkins in 2000, having abandoned the role of violin prodigy in her home state of Indiana. Having concentrated so much on her music, “I didn’t have the normal experiences of adolescence—after-school job, car, social life, time to myself,” she recalls. “I didn’t realize until 17 that there was a huge world out there to explore.”

At Johns Hopkins, the soft-spoken young woman threw herself into that world, majoring in Writing Seminars and minoring in anthropology. “Her narratives were always odd and peculiarly inventive,” recalls screenwriter Marc Lapadula, who taught Pruitt in four writing classes. “You knew she was going places.” As a senior, Pruitt won the fellowship named for Meg Walsh, A&S ’84, which financed a post-grad year of international travel and cross-cultural study. 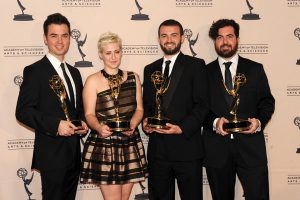 By the end of that year, “I was completely fascinated by material culture,” Pruitt recalls. “I could not unsee the way that commerce and art came together in the museum business, in the design business, in the fashion industry.” She went ahead with plans to study dramaturgy at Columbia but soon dropped out and applied to Parsons The New School for Design, also in New York. There, she earned a degree in fashion design, despite having no previous art training—or even previous sewing training. “It was a huge jump,” she recalls. “I went on the first day, and I had absolutely no idea what anyone was talking about.”

Pruitt worked for designers Marc Jacobs and Ralph Lauren, segueing into freelance marketing after a company saw her fashion sketches online and invited her to create ads for them. Building her business, Pruitt learned as she went along. For her first print campaign, she recalls with a laugh, she had to plead with  a magazine’s staff to teach her to get an ad’s specialized colors to print properly.

In late 2009, Pruitt landed her current job as the senior designer at the news and opinion website

The Daily Beast. Through acquaintances there, she met software developer Casey Pugh, and the two quickly became friends. “We both pride ourselves on being INTJs,” says Pugh, referring to the least common of the 16 personality types defined by the Myers-Briggs Personality Indicator (Introverted, iNtuitive, Thinking, Judging). “Those are people who are very detail-oriented and technical, who pride themselves on their logic.”

At the time, Pugh had recently launched the first version of Star Wars Uncut, an innovative site that slivers Star Wars Episode IV: A New Hope into 473 segments and invites users to remake a snippet and upload it to the site. Visitors can watch the whole movie composed of these clever, sometimes goofy segments, which include cartoons, stop-motion animation, and live action. (Pugh’s own contributions include a scene in which he plays Luke Skywalker to a mustachioed male friend’s Princess Leia.)

Pugh wanted to redesign what was then a basic site, and he turned to Pruitt. The two began meeting nightly after work, creating a livelier, slicker site that includes a pop-up video viewer, a timeline, and other professional touches. Pugh says it’s hard to describe Pruitt’s passion for the project. “‘Eager’ is not enough,” he says. “I thought I was a perfectionist, but I seem lazy compared to her.” After the redesign, Pruitt produced the team’s Emmy application, including the five-minute video that showcased the site’s innovations.

Pruitt, who wears her hair in a platinum pixie, designed and made her own dress for the August awards ceremony: a one-shouldered number striped in bronze.  She brought her statuette home to her Park Slope studio apartment, where it sits on a slab of marble on the radiator, one of the few adornments in a home Pruitt hasn’t yet had time to decorate.

The designer recently took a second job at a startup that delivers interactive advertising to mobile devices, and she and Pugh have also been hired to pitch website ideas to a major cable network. In her spare time, Pruitt is writing an interactive graphic science fiction novel. “I’m a big sci-fi nerd,” she says. If she ever has the money, she adds, she’d like to launch a fashion line.

To some, Pruitt’s trajectory may seem scattered, but she says she doesn’t worry about charting a straight course; she just follows her curiosity where it leads. “I’ve always committed to whatever I’m interested in, without being afraid of losing what I’m leaving,” she says. “You have to do what the creative voice tells you is right.”

Margaret Guroff is a magazine editor in Washington, D.C.