A Gift of Opportunity 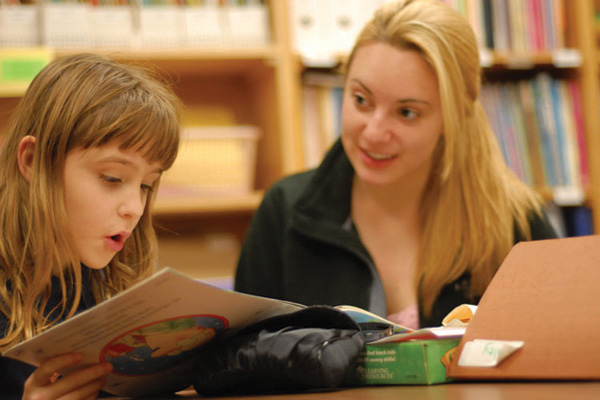 Through programs such as the Johns Hopkins Tutorial Project, the university is invested in creating and supporting a variety of opportunities for students to learn the benefits of mentorship. Photo: Mike Ciesielski

Shortly after he graduated from Johns Hopkins University, Willard Hackerman, Engr ’38, took a phone call from a school administrator asking if he’d like to interview for a job with a construction engineering firm. Hackerman, who had gone straight from school to an uninspiring job as a surveyor, eagerly said yes.

G. W. C. Whiting was co-founder of the Whiting-Turner Contracting Company, a builder of bridges and tunnels, and already a fan of Johns Hopkins engineers. (His right-hand man, Lester Phillipy, had graduated in 1920.) After the interview, he hired Hackerman as a field engineer for $35 a week.

Just 19 years old, Hackerman was inexperienced yet hungry to learn, and Whiting was a willing teacher and mentor. The two worked closely together for nearly two decades before Whiting selected his protégé to succeed him as president in 1955. “Mr. Whiting instilled in me the conviction that hard work and honest dealing would result in what we value most: the trust, loyalty, and respect of our clients,” Hackerman says.

Today Hackerman is still at the helm of the Whiting-Turner Contracting Company, one of the nation’s largest construction management and general contracting companies, known for building mid-Atlantic landmarks such as Baltimore’s National Aquarium, Harborplace, the Meyerhoff Symphony Hall, M&T Bank Stadium, the second Chesapeake Bay Bridge, and several projects on the campuses of Johns Hopkins University and the University of Maryland.

The earnest and inexperienced have relied on trusted counselors for perhaps thousands of years. (In Greek mythology, before leaving for the Trojan War, Odysseus charged an old man named Mentor to guide his son and guard his palace in his absence.) And while storied, lifelong relationships that result in the inheriting of a company might be rare, you’d be hard-pressed to find a Johns Hopkins University student, graduate, or faculty member who couldn’t name at least a couple of mentors who have helped them make their way through rigorous academic and professional environments. 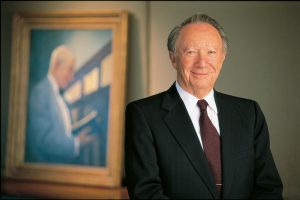 Willard Hackerman, shown in 1998 standing before a portrait of his mentor that hangs behind his office desk, has been a trusted adviser to deans and presidents and a volunteer leader at Johns Hopkins University for more than 70 years. Along with his wife, Lillian, he has provided philanthropic support on the Homewood campus and at the School of Medicine, notably making the visionary gift that established the Hackerman Scholars, a program providing tuition support for students from Baltimore Polytechnic Institute to attend the Whiting School. He was honored this fall for his unwavering support to the university by the naming of Hackerman Hall on the Homewood campus. Photo: Michael Melford

Often, those relationships happen by chance. But more and more, Johns Hopkins University is finding ways to nurture those kinds of relationships. Across Johns Hopkins campuses, initiatives such as the Carey Business School Alumni Mentor Program pair alumni with students based on industry career interests, then ask them to meet on their own schedules for coaching and casual conversations. The Johns Hopkins Nurses’ Alumni Association launched such a program this fall, with more than 40 alumni volunteering in the program’s first weeks, and the Career Center administers a similar program that serves alumni and students in the Whiting School of Engineering and the Krieger School of Arts and Sciences.

Students are also encouraged to mentor through programs like the Johns Hopkins Tutorial Project, an after-school tutoring program that serves about 100 elementary school students who come to the Homewood campus twice a week for one-on-one help with reading and math from Johns Hopkins undergraduate volunteers. In East Baltimore, a new federally funded, nationwide initiative to increase diversity in the nursing workforce has put a team of nursing students and practicing nurses in Baltimore city schools to mentor disadvantaged youth and provide health education. In return, the Johns Hopkins students, who also come from disadvantaged backgrounds, receive scholarships.

“Traditionally, a mentor’s goal was to take all of the knowledge they had and make sure the student teacher had all of that information,” says Lenore J. Cohen, a faculty member at the School of Education who, in 1994, established a teacher preparation program called the School Immersion Master of Arts in Teaching. In a larger effort to redesign teacher education, the program created structured mentoring relationships between classroom teachers and the graduate students who would spend one year interning with them. One of the first steps was to teach classroom teachers how to be mentors, rather than assume that a respected teacher would naturally make an effective mentor. The program offered instruction in theory and a “common language” created to help teachers articulate their practices, and it reinforced those skills through regular group meetings. “What we wanted were reflective practitioners who could think about their teaching and decide what makes sense for children and pass it on by explaining why it works,” Cohen says. “That doesn’t come just from putting in your years in the classroom, but from thinking hard.”

As the program has grown, from 19 interns in two schools in 1994 to 48 in nine schools across central Maryland in 2010, Cohen says it has been deemed a success. The benefit for students is tangible, but what’s often surprising is how deeply the mentors are affected. “It’s one thing to teach in a classroom, and quite another to give back to the profession you love,” she says. “When you share your expertise effectively, your influence can be exponential.”

Willard Hackerman would agree. In 1980, Hackerman, who had led the charge to re-establish the Johns Hopkins Engineering School, which had been merged with the School of Arts and Sciences after World War II, directed part of Whiting’s estate to fund the effort. The school, the G.W.C. Whiting School of Engineering, now bears his mentor’s name. What’s more, at Whiting-Turner, Hackerman created a formal program in which every newly hired engineer is assigned a mentor from among the company’s experienced ranks. In their first days on the job, every new engineer meets Hackerman.