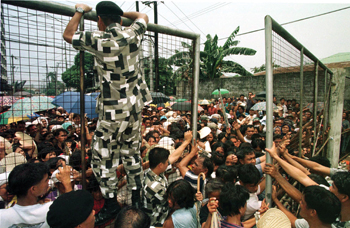 Each year, 3 million worshipers set out for the Muslim holy city of Mecca. The crowds at the annual Hajj pilgrimage become larger and larger as groups converge during the last legs of the trip, sometimes buckling elevated walkways and bridges. But there’s something besides their sheer numbers that threatens pilgrims: the actions of their fellow travelers. During the last 20 years, more than 2,500 Hajj participants were killed—crushed or trampled to death—after crowds panicked or became so excited they relentlessly pushed forward. Despite work by the Saudi Arabian government to widen roads and build better bridges in 2004, the Hajj still sometimes ends tragically for hundreds of people; more than 350 died just two years after the improvements. The horrifying regularity of such happenings, not just at the Hajj but other events worldwide, raises several questions. How do human stampedes begin? What conditions cause people to push forward? And what can be done to prevent deadly events?

Those are questions scientists have not yet asked. Edbert Hsu, an associate professor in emergency medicine at the School of Medicine, addressed that situation in two papers published during the summer in the journals Disaster Medicine and Public Health Preparedness and The Lancet. Hsu, SPH ’02, and others (including Yu-Hsiang Hsieh, an assistant professor of emergency medicine at the School of Medicine) amassed information about human stampedes from the only sources available: media reports. Searching the LexisNexis database, Hsu and his team gathered accounts of 215 stam­pedes worldwide between 1980 and 2007 that resulted in more than 7,000 deaths and twice that many injuries. Most events occurred in Africa and South Asia, with religious gatherings taking more lives than any other type of assemblage. The researchers found that despite efforts by the Saudis and others, stampedes are on the increase, particularly in developing countries where government officials have been reluctant to impose standards that could reduce the number of deaths and injuries.

What Hsu’s study, the first stampede survey of its kind, did not find was information on how people behaved when panicked or what killed the victims. Data on the status of the injured at hospitals—even something as basic as an accurate count of fatalities—often doesn’t exist. Although there have been safety studies on the design of places where masses of people gather, there has been little investigative work from the perspective of public health. “There’s a lack of the kind of epidemiological data we need to help prevent these events, to figure out how to get to people who are hurt, and how to treat them once we do,” says Hsu, who has also investigated emergency responses to Hurricane Katrina and several earthquakes. “We stand to learn a lot from studying these disasters.“

Hsu concedes that mass tramplings aren’t easy to investigate. Emergency personnel concentrate on treating the injured and getting them to hospitals, not analyzing and recording how they got hurt. Scientists can’t run randomized controlled trials to see which circumstances cause human stampedes and which do not. But the numbers he and his associates came up with cry out for more research, he says. Even Western societies that routinely develop crowd-safety measures exhibit a level of ignorance about the potential for crowd panic and resulting death tolls, he says. At a musical festival in Germany last July, 21 people were killed and 500 injured in an overcrowded tunnel leading to the concert. News reports indicate that organizers of the event planned for 800,000 people; more than 1.4 million showed up. “They couldn’t get a read on how many people were going to come through [the tunnel],” says Hsu. “That kind of crowd makes you question how medical workers would get through it to reach the injured, or what more could have been done to avoid the event.”

Hsu says the next step for researchers is to figure out how humans behave when crammed together, why they panic or press forward compelled by anticipation of better concert seats or proximity to a religious leader, for example. Most of what scientists know about stampedes comes from anecdotal sources, which suggest that human psychology undergoes a change when people are forced into tight spaces, especially when about 10 people are crowded into one square meter—the equivalent of about 1,000 in a mid-sized classroom. Under such pressure, crowds tend to move as one and ignore alternate exits, accelerating the possibility of disaster. Many of those who die in stampedes perish standing up—crushed and unable to breathe. Hsu says the force of a crowd pushing in the same direction is staggering. Seven people moving at once can bend steel.

“International health organizations have to recognize that this is an important type of disaster,” Hsu says. “If they made it a protocol to send someone to a trampling disaster quickly to see what happened, we would have detailed reports we could use to compare and contrast.” Ultimately, he’d like to see an international stampede database that would compile scientific information on each event. “Without it, we won’t really understand what we’re dealing with.”