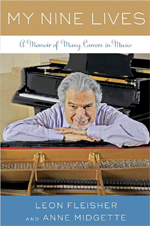 In the fifth paragraph of his recently published memoir, pianist Leon Fleisher writes, “If my story is about anything, it’s about being very careful when your dreams come true.” Fleisher, who has been a revered teacher at Peabody Conservatory since 1959, began studying the piano at age 4; by 16 he had performed with the New York Philharmonic. During the next 20 years he achieved international renown as a concert and recording artist. But in 1963 the fourth and fifth fingers of his right hand began to curl into the palm; within a few years the hand was rendered unusable by focal dystonia, a neuromuscular disorder. It would take Fleisher 30 years of extraordinary work and determination before he could perform with both hands again, his right restored by a combination of Rolfing and Botox injections. He continues to teach at Peabody and make concert appearances in his 83rd year.

Fleisher recounts his remarkable story in My Nine Lives: A Memoir of Many Careers in Music (Doubleday, 2010), co-written with Anne Midgette, music critic for The Washington Post. Readers who already know the arc of Fleisher’s life story will savor details. As a boy, he could memorize a Beethoven sonata in one night. He began his teaching career when he was 15, giving lessons to a youngster named Pat in exchange for baklava baked by her mother. He accepted the faculty appointment at Peabody in part so he could qualify for a mortgage. He tends to tilt his head back to gaze at his Peabody students through his bifocals, causing some of them to refer to a particularly intense lesson as “going up Fleisher’s nose.”

My Nine Lives is a triumphal life story, but such a life comes at substantial cost, often to the other people who are part of it. Fleisher is a sublime musician, an exemplary teacher, and an intelligent, charming, generous man, but he was a lousy husband to his first two wives, a serial philanderer, and not much of a father when his five children were young. That’s all in the book, too. Fleisher does not gloss over his failings any more than he effects false modesty about his accomplishments. Near the end of the book, he reproduces a letter he wrote in 2008 in which he wryly noted, “Some seven decades separate the time when older people would tell me that I played very well for my age from the occasions nowadays when younger people say the same thing.” 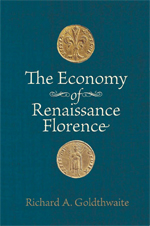 Richard A. Goldthwaite, Johns Hopkins emeritus professor of history, has devoted decades of scholarship to teasing out the complexities of the Renaissance Florentine economy. The crowning achievement of that life’s work is The Economy of Renaissance Florence (Johns Hopkins University Press, 2011), a 672-page history of Florentine economic development from the late Middle Ages to 1600, just issued in softcover. The hardcover edition was named 2009 Outstanding Academic Title by Choice, which reviews scholarly titles for academic libraries, and won the 2010 Phyllis Goodhart Gordan Book Prize from the Renaissance Society of America.

Check. When Peter Pronovost found that use of simple checklists by nurses and physicians produced stunning reductions in hospital-acquired infections, he became a national figure. The medical director of the School of Medicine’s Center for Innovation in Quality Patient Care, Pronovost has teamed with freelance writer Eric Vohr to write a manifesto for better hospital practices titled Safe Patients, Smart Hospitals (Plume, 2011), newly issued in softcover. The youthful-looking Pronovost, who became a MacArthur Fellow in 2008, recalls traveling to Michigan for a meeting and introducing himself to the driver who’d been sent to the airport to pick him up. Said the driver, “No, sonny, I am waiting for an important doctor from Johns Hopkins.”