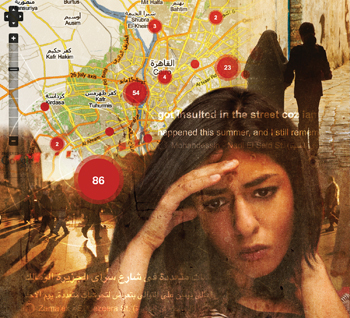 Weeks before its formal December launch, the Cairo-based website HarassMap was already buzzing with dozens of contributions. “Car full of pervs in Zamalek,” read one anonymous report of sexual harassment in the Egyptian capital. “Nearly every male passing me slowed to ogle and smirk, making me less confident and more angry with every minute.”

An interactive project that turns women’s text messages, web postings, emails, and Twitter feeds into points on a Google map, HarassMap is the brainchild of Rebecca Chiao, a 2004 graduate of the Nitze School of Advanced International Studies. The reports are color-coded by categories, including “touching,” “catcalls,” and “indecent exposure.” Chiao has lived in Cairo for six and a half years and says the country’s capital and other cities suffer from an “epidemic” of routine stalking, grabbing, and molestation of women on public streets. “We want to change the social acceptability of sexual harassment in Egypt,” she says.

HarassMap uses the Ushahidi technology platform, developed in Kenya, that employed crowd-sourcing technology to document eyewitness accounts of election violence after the 2007 elections. A 2008 Harvard University study credited the Ushahidi campaign with “sparking increased global media attention” to Kenya’s post-election crisis. HarassMap has similar goals, says Chiao. The hope is to empower Egyptian women to speak publicly about harassment, and to encourage business owners and police in high-harassment areas to take positive action to confront the problem.

Chiao, who grew up on a 300-acre family farm in north-central Pennsylvania, came to Egypt by way of a SAIS course on the microeconomics of development. Associate professor Karen Macours asked students to profile a non-governmental organization. Chiao, who had spent four years working for Americans for Peace Now, says she “randomly” selected the only Middle Eastern NGO on the list: the Egyptian Center for Women’s Rights. The group brought her to Cairo after graduation to work as director of international relations, but she also ended up starting a volunteer program and the first sexual harassment project in Egypt.

“The sexual harassment program started with those volunteers,” Chiao says. “They were getting attacked and would come to work crying.” She led a public awareness campaign between 2005 and 2007, conducting public opinion surveys on harassment that for the first time drew widespread Egyptian media and government attention to the problem.

Building on that experience, Chiao teamed up with three Egyptian women and Arizona-based NiJeL Inc., a developer of mapping technologies, to develop HarassMap. The all-volunteer startup has no office or paid workers, but its ambitions are far from modest. “We have a global rollout plan,” says Chiao, who is now a freelance consultant to NGOs. Working with New York–based Hollaback, another anti-street-harassment group, Chiao hopes to launch HarassMap sites in several countries next year, including the United States, Lebanon, United Arab Emirates, Turkey, India, Pakistan, and Brazil.