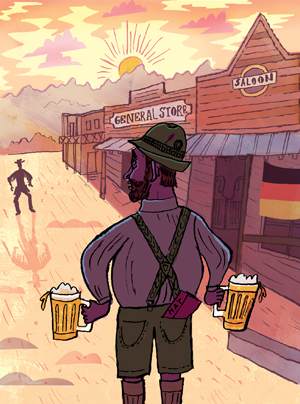 According to Lord Tennyson, “In the spring a young man’s fancy lightly turns to thoughts of love.” Much is wrong with that: Only in the spring? Just young men? Why “lightly”?

Another problem? Germans. In the spring, it turns out, many of their fancies turn to Karl May, an author who inspires at least three annual festivals in Germany and German tourist excursions to the American Southwest, the setting for his most beloved work.

Why does May warrant festivals and tour groups? Little known in the United States, he may be the best-selling German-language author of all time, outpacing flashes-in-the-pan like Goethe. His success raises interesting questions about popular culture and perhaps about Germans.

Born in 1842, he became an accomplished con man, liar, and ex-convict. True to form, as an author, he wrote detailed accounts about places he’d never seen, including the Middle East and the American frontier. He was already famous as an author of Western novels when he first visited the United States in 1908, four years before his death. He ventured no deeper into cowboy country than Buffalo, New York.May’s copious oeuvre includes fictitious travel accounts, mystical writings, and one of his lesser works of fiction, an autobiography (now available on Kindle). His reputation, however, rests on his novels, still in print, including a growing number in English.

Although May’s Middle Eastern adventures have their fans, his two most memorable creations lived in the American Wild West. One is Winnetou, a member of the pueblo-dwelling Apaches—a previously unknown group—who is spiritual, noble, brave, and therefore doomed. The other is his friend, a German immigrant turned Übermensch on horseback. His nickname is Old Shatterhand, “given to me because of the reputation my strong hands had earned in knocking down anyone who attacked me.” He avenges wrongs with the social skills of a Clint Eastwood character.

It is Winnetou, Shatterhand, and Karl May’s version of the West that inspires festivals. The one in Radebuel in June 2011 will feature a number of supposedly Wild West attractions: a re-enactment of Virginia Confederate volunteers, a bluegrass and country music festival featuring Jimmy Bozeman and the Lazy Pigs, contemporary Native American musicians, and the toe-tapping tunes of Zydeco Annie and the Swamp Cats. Cajuns and Indians? Perhaps this weird sense of the American West is the appropriate tribute to May. For him, accuracy was one option among many.

There are disquieting things about Karl May’s popularity, even if it is largely quarantined to continental Europe.

One is parochial. Isn’t the Western as a genre ours—all-American, something about us that we own? Of course, there are Italian “spaghetti Western” movies, but cut the Italians some slack. It’s understandable why they might like big, overblown epics in which lots of people die, plots don’t make sense, and women are madonnas, whores, or schoolmarms who could go either way. Epic Westerns are just operas without dying sopranos. But what’s in it for Germans? Or for people in other cultures? How to explain something like the 2007 Japanese movie Sukiyaki Western Django, a stylish remake of an Italian Western?

Perhaps the most thought-provoking thing about May’s popularity is his list of admirers. Albert Einstein: “My whole adolescence stood under his sign. Indeed, even today, he has been dear to me in many a desperate hour.” The humanitarian Albert Schweitzer: “What I liked most in his writings was the courageous stand for peace and mutual understanding, which inspires nearly all his books.” May was indeed a pacifist, unlike Old Shatterhand—and unlike another admirer, Adolf Hitler, who apparently turned to May for relaxation and even tactical advice during World War II.

It’s hard to know what to make of that list. Maybe popular culture works best when it is many things to many people. Perhaps another admirer, and somewhat better writer, got it right. Hermann Hesse called May “the most brilliant representative of a truly original type of fiction—i.e., fiction as wish fulfillment.” If so, perhaps not all wishes should be fulfilled.