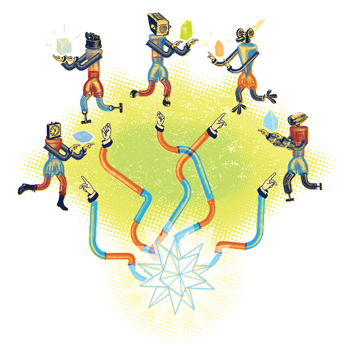 As field director for Peter Franchot’s successful 2006 campaign for comptroller of Maryland, Jacob Colker learned some things about mobilizing volunteers through Internet social networking. He used Facebook to recruit campaign volunteers, the first such use of social media in a statewide election, he believes. Along the way he learned that when people declined to volunteer, their most common explanation was a lack of free time, despite data that revealed Internet users spend more than 270 million hours on Facebook and watch some 1 billion YouTube videos every day. Was there some way, Colker wondered, to redirect some of that time from Twitter or Farmville toward helping good causes?

He believes he has created one, a new online venture called Sparked.com. Through its website, Sparked enables people to “micro-volunteer”—that is, apply small fragments of spare time, literally five or 10 minutes, to various projects that benefit nonprofits. People with language skills, for example, can spend a few minutes at a time translating documents. Graphic designers who can’t spare the hours it might take to create a logo for an environmental group can collaborate online and, a quarter of an hour at a time, complete the job. The website not only facilitates volunteers contributing to projects; it also provides a simple, efficient framework for nonprofits to coordinate the efforts of all those volunteers.

In 2008, when Colker began developing what became Sparked, he was working on a master’s in communications from the Krieger School’s Advanced Academic Programs. But the project has grown so fast that he has taken a leave of absence from his graduate studies.

To create the venture, Colker partnered with digital entrepreneur Ben Rigby, author of Mobilizing Generation 2.0 (Jossey-Bass, 2008), to create a system that could match designers, programmers, writers, marketing professionals, and others with projects posted by non­profits. By 2009, they had won the support of heavy-hitting technology investors like Mitch Kapor and Esther Dyson. Last year, the new Rolex Young Laureates Programme awarded Colker $50,000 to help develop his company.

Sparked has attracted more than 1,000 nonprofits (65 percent are repeat users), Colker says, and more than 200,000 volunteers; lately, nonprofits have been signing up at a rate of 20 per day. Funding comes from corporations such as Kraft, Google, and SAP, which encourage their workers to volunteer on the site as part of corporate social responsibility efforts. Sparked is organized as a for-profit Certified B Corporation, meaning it pledges to adhere to higher standards for transparency, environmental and social performance, and legal accountability.

Colker, 27, likes to illustrate the power of the Sparked network with the story of Jackson, a Masai tribesman who, with the help of an aid agency, signed on to the website and requested advice on how his Kenyan village could drill a well for water. Within a week, an expert on Third World water issues living in San Francisco connected the Masai to a well-drilling company that was run by a nonprofit agency and, better yet, located in Kenya near Jackson’s village. As a result, says Colker, the Masai community will soon have fresh water.