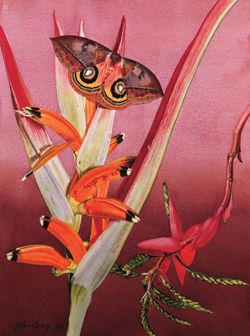 John Cody was 5 years old when he first encountered a large, ornate saturniid moth—a moment he calls his “introduction to beauty.” While his mother battled to keep the pests out of the family’s closets, Cody found his artistic calling.

Cody, a retired psychiatrist, has spent a lifetime painting Saturniidae, the family of moths that includes some of the largest and most beautiful species. His renderings have been published in books and exhibited at the Smithsonian Institution and at the American Museum of Natural History. The legendary former editor of Audubon magazine, Les Line, dubbed him the “Audubon of moths.”

In 1947, Cody’s combined interest in painting and medicine drew him to the School of Medicine’s Art as Applied to Medicine program. His detailed depictions of moths helped get him in. (The highly competitive program, which celebrates its 100th year in July, graduates no more than six students each year.) After leaving Baltimore, he spent time in the Caribbean as staff artist for noted explorer-scientist William Beebe and worked as a medical illustrator in Arkansas before attending medical school at the University of Arkansas. “I never stopped painting and drawing moths,” says Cody, “even in medical school.”

Cody likes to paint from actual specimens he catches or hatches from cocoons—a preference that has led to more than a few adventures. As a newlywed, he shared a small apartment with his bride, Dorothy, and 70 luna moth caterpillars he fed with heaps of sweet gum branches. “The landlord couldn’t figure out how all the leaves got in the hall,” Cody says.

Cody practiced medicine for 25 years. He also authored several biographies, including one of Max Brödel, who founded the Art as Applied to Medicine program. But his consistent devotion has been to celebrating the saturniids. In 1996, he was celebrated in turn. A newly discovered moth—a chocolate-brown specimen found only in northern Pakistan—was formally named Saturnia codyi in his honor.