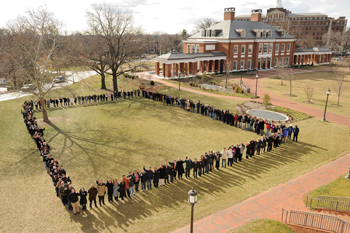 Malone Hall will rise—as soon as these happy, waving people move—on the southeast corner of Decker Quad, between Hackerman and Mason halls. Photo: Will Kirk/Homewoodphoto.jhu.edu

Two new transdisciplinary research initiatives are getting a home of their own. Johns Hopkins recently announced that John C. Malone, Engr ’64 (MS), ’69 (PhD), chairman of Liberty Media Corporation, has pledged $30 million to the Whiting School of Engineering for a new research building that will rise four stories above Decker Quad and encompass 56,000 square feet. Construction of Malone Hall will begin in 2012.

Malone’s gift is the largest in the history of the Whiting School. In a statement released by the university, Malone said, “I am pleased to be able to support the Whiting School and its leader, [Dean] Nick Jones, in this exciting expansion of interdisciplinary research between the School of Engineering and so many of the other divisions of the university.”

One of the new initiatives, the Johns Hopkins Systems Institute, will involve eight of Hopkins’ 10 divisions in the research of complex systems, to engineer improved systems approaches to public health, neuroengineering, health care, civil infrastructure, information security, education, and other areas of national importance.

Individualized medicine will be the second research initiative housed in Malone Hall. As the name implies, researchers from Engineering, Medicine, and life sciences will collaborate on applying information science to the development of individual treatments for patients. The initial focus will be on cancer, a disease with complex genetic and epigenetic factors that make individualized treatment protocols desirable.