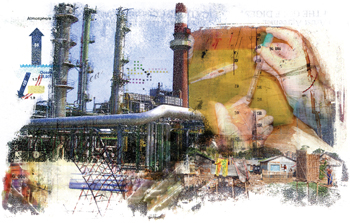 If you believe academics who practice the science of public health, the work of people like them is responsible for increasing the world’s population from around 500 million, where it had been stuck for centuries following the plagues of the Middle Ages, to 7 billion today. Proponents of this thinking, including Alfred Sommer, a storied professor and senior associate dean at the Bloomberg School of Public Health, point to the field’s many breakthroughs in containing diseases and providing food, clean water, antibiotics, and vitamin regimens to even the poorest people around the world. Emphasis on improving health care access, hygiene, and prevention, so the thinking goes, explains modern humanity’s dominion over the planet.

There’s one crucial element missing from this scenario: cheap energy, mostly in the form of oil. From around the U.S. Civil War onward, humanity’s fortunes have risen on a tide of crude oil. In addition to literally fueling much of the world’s economic growth, oil and things made from it have done more than allow public health pros to travel to trouble spots around the world. Fossil fuels have also provided the chemical basis for fertilizers and pesticides that have helped poor countries grow enough food. Medical supplies essential to treatment, such as affordable latex gloves and IV tubing, are made from petroleum. Energy-gulping air conditioning and ventilation systems in tropical developing nations make patient comfort and important research possible. And many lifesaving drugs essential to the health of millions of poor people are made from chemicals wrought from the molecules of petroleum.

But now that the oil industry is approaching, or has already reached, a time when its ability to extract available petroleum has maxed out, will the public health standard set in recent decades continue? What happens when the earth cannot yield enough inexpensive oil to take care of the health of its poorest nations?

In an article to be published later this year in the American Journal of Public Health, Peter Winch, SPH ’88, a professor of social and behavioral sciences at the Bloomberg School, warns that the gains made by public health in the past century may slowly be rolled back as oil becomes progressively more scarce and expensive. What’s more, as the nations of the world increasingly scrape for petroleum, scientists who believe that saving lives is worth any amount of available grant money may have to change their thinking.

“A lot of people believe that our basic M.O. will stay the same,” says Winch. “But there’s no way it will. We have to recalibrate what we’re doing in the field. Just getting people thinking about what will happen when oil is scarce is a challenge.” He sees the energy issue as one that decision makers in public health should take more seriously, as they already do in regard to climate change and degradation of the environment. “The way public health uses liquid energy is part of a problem that threatens to increase mortality,” Winch says, arguing that using energy as in the past will contribute to future shortages that may affect the nutritional health of people in poor countries. “We should be working to prevent such a sudden threat, which means we should stop relying so heavily on a resource that is becoming rapidly depleted,” he says.

Winch recommends that public health hospitals and research stations in poor countries reinstitute low-energy natural ventilation systems and reintroduce surgical supplies that can be easily sterilized and reused. He says foreign aid organizations and universities should factor in dwindling amounts of fuel when planning public health interventions and reduce their reliance on air travel. He says that some programs, such as ones that work to minimize threats to a birthing mother’s health, should more often be constructed so that local people can run and maintain them using less energy.

For his study, Winch explored the connection between a population that author and Oxford economics professor Peter Collier calls “the bottom billion”—the poorest seventh of humanity, who live in 58 countries—and the effects of the phenomenon known as peak oil, after which the supply of oil will forever trend downward. Much of the bottom billion lives in underdeveloped, landlocked countries that already pay much more for oil because neighboring coastal nations charge them oversize fees to deliver it. Reaching those countries and rural ones with the tools of the public health trade—medical professionals, transportation, portable supplies, and oil for hospital generators—will cost much more in the coming years, he says. Food will be harder to grow without inexpensive fertilizers, pesticides, and gasoline-fueled irrigation systems, raising the price of food and increasing hunger.

Scientists are hazy about precisely when the world’s oil production will reach its apex. But they agree that the supply will diminish as the years pass, as the energy needs of the Western world continue, and countries in the East, particularly China and India, experience explosive growth. The concept, first formulated by geo­physicist M. King Hubbert in 1949 (it is also known as Hubbert’s Peak), has been honed to the point that researchers believe that the zenith of the oil age has either already happened or is imminent.

Although Winch doesn’t foresee mass die-offs from a shortage of fossil fuel, he says the results will be devastating over the longer term. “What we might experience is analogous to what we’ve seen from HIV/AIDS in Africa,” He says. “We’re more likely to see life expectancies diminish. People will start dying younger.”

Winch’s paper will be published in a special peak oil supplement of the American Journal of Public Health, to be edited by another Bloomberg professor, Brian Schwartz, and assistant professor Cindy Parker. Schwartz says the fallout from the emergence of peak oil won’t be limited to the bottom billion. “We’ll see recessions that come from oil price shocks, to be followed by growth. Then, the price of oil will go up because of increased demand, and the process will repeat itself. What happens during recessions? Politicians cut budgets, which would lead to fewer clinics and vaccinations. Public health will suffer even in wealthier nations.”