The astronaut who fell to Hopkins
February 28, 2011 |  by Michael Anft 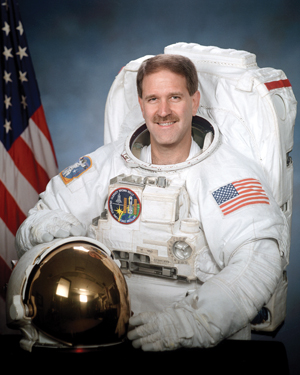 During John Grunsfeld’s 800 hours in space, much of it spent floating in the ether with a tool in his hand, he tweaked mirrors, fixed wrecked cameras, and dodged shards of space junk as NASA’s longtime “repairman” of the Hubble Space Telescope. Nowadays, Grunsfeld is in a safer place. He’ll keep his head in the stars but his feet on the ground (to paraphrase telescope buff Theodore Roosevelt) as a research professor in Physics and Astronomy at the Krieger School. Most of his work will still involve telescopes. But it will hardly be as prosaic as that sounds. Grunsfeld is one of many astrophysicists around the world who will attempt to lay the groundwork for the Great Escape—the time, ostensibly, when humanity is able to travel to strange new worlds, not just to explore but to inhabit them.

The recent discovery of rocky exoplanets—orbs in our galaxy that circle distant stars—heralds the beginning of a fascinating era, Grunsfeld believes: “Not only might we answer the age-old are-we-alone question, but also another one: Is there another place for earthlings to go? Will we find planets that are habitable? Astronomy can answer those questions.”

Recent improvements in telescope technology have afforded scientists the chance to search for the possibility of life elsewhere—or at least pinpoint and study a planet like ours. “One of the things I learned as a young astrophysics student was that planets aren’t common in our galaxy,” Grunsfeld says. “Well, now we know that’s wrong. We can see that when a planet travels between our vantage point and a star, the star’s light is dimmed. We can use that change in light to measure the size of the planet. This new knowledge can help us answer some deep, fundamental science questions. If we get answers, we could start a scientific revolution that rivals the one Copernicus started.”

In January, NASA scientists discovered the first rocky planet outside our solar system—Kepler-10b—560 light-years away, where it orbits a sun-like star in the constellation Cygnus. Unlike other exoplanets previously uncovered by telescopes, Kepler-10b is solid, not the usual ball of gas. Rocky planets are more apt to contain liquid water—a necessity for life as we understand it. Kepler-10b, nearly half again as large as Earth, was the first of 1,235 possible planets NASA now has isolated by using a telescope mounted on a satellite. “When the Hubble was launched 20 years ago, we knew of nine planets in the universe—all of which were in our solar system,” says Grunsfeld, adding that the number reverted to eight a few years ago when Pluto was reclassified downward to a “dwarf planet.” “In the mid-1990s, astronomers began seeing what looked like planets circling stars. Soon we’ll know of possibly thousands of solar systems, and many will have planets,” he says.

Grunsfeld brings an astronaut’s perspective to the exoplanet search, a perspective he hopes will help inform a new generation of scientists. “Right now, humanity is making the conditions ripe for a mass extinction,” he says. “Looking down upon the earth from space, you see how we need to protect it. The earth is a system. I want to help train people to see that.”

He’ll have the tools to work with. The James R. Webb Telescope, scheduled to be up and running in 2015, will be housed at the Hopkins-affiliated Space Telescope Science Institute, where Grunsfeld also holds a position. He and other Hopkins astronomers, who are searching for clues to the force behind dark energy and signs of life elsewhere, will have ready access to it. “I left the astronaut corps to find a voice to talk about the future of humans in the cosmos,” says Grunsfeld, 52. “And the campus here seems like a good place to do that.”